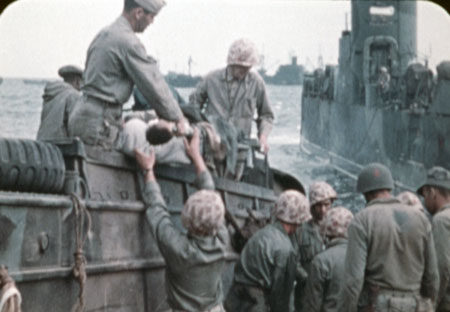 This image of Marines at Iwo Jima comes from Marine Corps films that will become part of the University Libraries' Moving Image Research Collections.

From the Iwo Jima beaches to the jungles of Vietnam to the training base at Parris Island, the U.S. Marine Corps history comes to life in films shot by Corps photographers from the late 1930s through the 1970s.

That footage — 16,000 reels of film documenting the operational history of the Marine Corps from World War II through Vietnam — is moving from Marine Corps University in Quantico, Virginia, to the University of South Carolina, home of one of the largest public film archives in the U.S.

The university’s Moving Image Research Collections will digitize the Marine Corps Film Repository, with plans to eventually place the films online for the public to view free of charge.

Storing and digitizing an estimated 2,000 hours of film won’t be easy — or cheap. The University of South Carolina must raise about $2 million to make the video available to the public, with funds going to storage, inventory, cataloging, digitizing and streaming the video.

“Because of its sheer size, stewardship of this collection would be a challenge for any institution. We were eager to make space and digitize these films so that they could be made available to the American public and former and serving Marines,” said UofSC Dean of Libraries Tom McNally.

Contributing to the effort will make the film repository — which includes footage from World War II and the Korean and Vietnam wars, along with training and testing activities — available to the public for the first time. The money raised will be used to hire staff to digitize and research the content, along with promoting programming and outreach to publicize the collection.

“Providing digital access to a collection of this scale is a major undertaking, and timing is critical,” McNally said. “The Marines who served their country overseas and here at home in the 20th century are aging. Their memories — a vital source of context for these films — will soon be lost.”

UofSC has raised private funds to build a special climate-controlled vault to ensure the stability of these perishable originals. The funds were donated by Richard and Novelle Smith, in memory of her cousin, Marine Capt. James H. Davis of Columbia, South Carolina. Davis served as a company commander in Vietnam and was one of the last Marines to leave Koh Tang island by helicopter in March 1975, ending the final official battle of the Vietnam War. A 45-minute oral history with Davis is among the items that will be available to the public.

The vault should be completed late this summer. The university has received a small sampling of films from the Marine Corps, and the remainder will arrive once the vault is built.

The collection includes everything from battle scenes to training films, offering a comprehensive look at how a service branch went about the business of making films and why they did it, said Greg Wilsbacher, a curator for the university’s Moving Image Research Collections.

Along with the combat images, the films show the history of Marine readiness – the work the military does in peacetime to be prepared to fight the next war. For example, one of the oldest pieces of footage is from the base at Quantico in the 1930s, showing officers learning how to assault beaches using amphibious craft, preparing them for dropping armed men on the beaches in the Pacific a few years later. Film from the 1950s shows early training with helicopters, foreshadowing the importance of the equipment for transporting Marines in Vietnam.

It also provides a glimpse of events in Marine history, eventually allowing viewers to log on and see individual units and bases where Marines trained. Many are shot at the Marine Corps Training Depot at Parris Island in South Carolina, including a movie from September 1961 that focuses on the processing and training of recruits. In it, you can see men’s faces and read the names on their uniforms. “People can say, ‘That’s my dad right there. He’s 18 years old,’ ” Wilsbacher said.

“There is a commitment to let people see it for free; to make sure that everybody can see the films regardless of where they are,” he said. “Collections of this size don’t pop up very much. That’s one of the things that’s important. This is a library that was functioning and intact. That makes it a better representation of the Corps’ history. It was a well-cared-for collection.”

How you can help