Loosening the buckle in the stroke belt 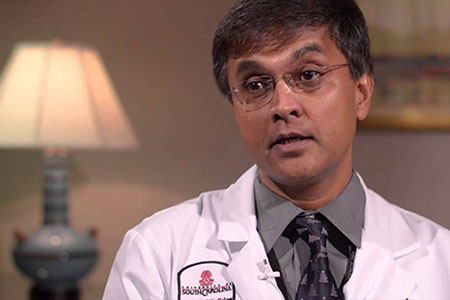 Souvik Sen was recruited to the University of South Carolina's School of Medicine in 2010 as the SmartState Endowed Chair in Clinical Stroke Research.

Medical scientists just vetted a potentially powerful new tool for helping prevent stroke and heart attack. In a study recently published in the New England Journal of Medicine, researchers show that a drug reduced the risk of stroke or heart attack by almost a quarter in patients who had previously suffered a stroke or mini-stroke.

It's an exciting result for a drug in a new class of medication now being harnessed to prevent stroke and related cardiovascular problems, says Souvik Sen, a professor of clinical neurology at the University of South Carolina School of Medicine and one of the co-authors of the study.

“Before, we had blood thinners, statins, and blood pressure medications,” Sen says. "Now we can top it off with this new drug, with an additional 24 percent of risk reduction.”

The three established approaches to stroke risk reduction have yielded significant fruit, according to Sen.

“When someone has a stroke, they will usually be placed on a blood thinner, such as aspirin or Plavix, or in some cases it would be on an anticoagulant, something like Coumadin, or warfarin. It depends on what caused the stroke,” Sen says. “And if they have any indication of elevated cholesterol, or hardening of the blood vessels, they would be placed on a medicine called a statin, which has been shown to lower cholesterol as well as prevent stroke. And probably the most important medication is one for the treatment of blood pressure, which is one of the biggest risk factors for stroke.”

The effectiveness of blood thinners, statins, and blood pressure management in reducing stroke risk was demonstrated through evidence-based studies, Sen says, with the three methods becoming, over the past decade or so, a standard of care for treating patients who have suffered a stroke. But there was another risk factor associated with stroke that researchers wanted to look at more carefully: insulin resistance.

Insulin resistance is an early step toward type 2 diabetes. In type 2 diabetes, the body is able to make insulin, which regulates blood sugar levels, but for reasons that remain unclear, is unable to use it as effectively as in an unaffected person. (Type 1 diabetes, once called juvenile-onset diabetes, is a horse of a different color: in that autoimmune disease, the pancreas's ability to even produce glucose-controlling insulin has been essentially eliminated.)

Researchers had shown that insulin resistance—sometimes referred to as pre-diabetes given its proximity to type 2 diabetes proper—was associated with a higher risk of stroke and heart attack. Both of those acute medical events involve a blood clot breaking free within the cardiovascular system, being carried to and becoming lodged at another site in the bloodstream, and then restricting blood flow to such a degree that tissue damage occurs, whether in the brain (stroke) or heart muscle (heart attack).

The research team set out to test pioglitazone, a drug within a class of medications (thiazolidinediones) that has been shown to help reduce insulin resistance; that is, increase insulin sensitivity. Some previous studies of drugs within this class had shown potential problems with side effects, so the team had to be careful not to enroll patients with certain risks, particularly for heart failure.

In a five-year, double-blind trial of pioglitazone versus a placebo, the team found that patients receiving the drug had 24% fewer incidences of either stroke or heart attack, as reported in the New England Journal of Medicine. Given that all of the patients involved were already getting a very high standard of care going into the trial, the level of success was surprising and should translate into further progress in reducing stroke’s impact.

“It’s a very positive result. We see pre-diabetes all the time in many of these patients, and before, the prevention strategy would not have been any different,” Sen says. “And this medication, in addition to preventing stroke, is also preventing diabetes.”

It also represents a new approach toward better understanding an ailment that disproportionately strikes and kills in Southeast for reasons that, according to Sen, are not fully accounted for.

“That means that a good 40 percent of the risk is unexplained, and studies like this help to move research in this area along. It’s good to know that pre-diabetes is a risk factor for stroke or heart attack and that we can provide an additional method of prevention.”

The primary research article was published in the New England Journal of Medicine, available here.