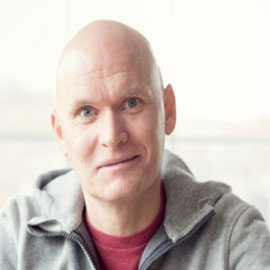 Pulitzer Prize-winning novelist, short story writer and essayist Anthony Doerr takes part in the University of South Carolina's 2016 The Open Book Series. Born in Cleveland, Ohio, Doerr is the author of two short story collections and “All the Light We Cannot See,” the 2015 Pulitzer Prize winner for fiction and the 2015 Andrew Carnegie Medal for Excellence in Fiction.

In this Q&A, Elise Blackwell, professor of creative writing and series host, answers a few questions about “All the Light We Cannot See” and Doerr, who will read selections of his work at 6 p.m. in the Law School auditorium on Wednesday (April 6).

A discussion of Doerr’s writing led by English professor Tony Jarells is at 6 p.m., Monday (April 4), in the Hollings Special Collections Library. Both events are open to the university community.

This novel is set in Europe at the beginning and during World War II. Who are the main characters?
There are two. The first to be introduced is a blind French girl named Marie-Laure LeBlanc who grows up near the Museum of Natural History in Paris and later flees Nazi occupation by accompanying her father to the walled city of Saint-Malo in possession of a what may be an extraordinarily valuable and dangerous jewel. The other is a German orphan named Werner Pfennig, who grows into a radio expert working for Nazi intelligence.

This sounds like two distinct stories do they converge?
The lives of Marie-Laure and Werner converge in Saint-Malo, where the book opens as American airpower arrives in 1944.

Do you think stories of war have a particular resonance for readers?
I think readers are always fascinated by how people behave under extreme conditions, in crucible situations that reveal who a person really is in ways that aren’t always apparent in calmer times.

What sets this story apart from other war novels?
While the brutality of war is very much present in this novel, its ultimate focus is on two people who attempt to be good to each other in horrible circumstances — about the beauty that exists in the world simultaneously with horror. The novel is also wonderfully rich in information about things not commonly written about in war fiction, including the natural world.

Is Anthony Doerr related to Harriett Doerr, late writer who published her first novel in her 70s?
Not as far as he knows, so if they are related it would be only distantly.