Helping women teach each other to lead 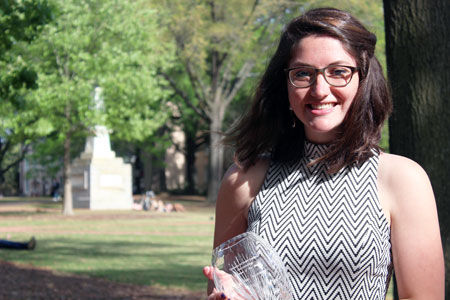 “I have been fortunate to touch the lives of my peers at USC through holding the leadership positions of resident mentor and Emerging Leaders mentor.” — Caroline Westberg, 2016 Outstanding Woman of the Year

Helping her peers, especially other young women, find their leadership voice is Caroline Westberg’s passion. She has spent the past year – her senior year at the University of South Carolina – creating Women LEAD.

“My vision for Women LEAD is to empower the women who might not recognize their leadership capabilities to look inward, acknowledge their full potential and explore that potential in an inspirational community of other women experiencing the same process,” Westberg says.

Westberg was named the 2016 Outstanding Woman of the Year. The annual award recognizes UofSC students for academic achievement and campus and community involvement and service. Students can be recognized for achievements in athletics, the performing arts, campus media and work experience and internships. The key focus is on contributions and impact to the university and to other women.

Westberg says her organization focuses on the support and help women can give each other.

That support that comes from other women was at the heart of the message by social entrepreneur Veronika Scott, founder of the Empowerment Plan, which employs homeless workers to make coats for the homeless.

“There was no reason for anybody to trust in me and believe in me at that time,” Scott said at a ceremony Wednesday honoring the five finalists for the award. “Least of all, Annis Maxwell, who had been in prison and was coming out at 58 years old.”

Scott, who had started her coat-making business as a class project at Detroit's College of Creative Studies, says she hired Maxwell, mainly because Maxwell showed up early for her job interview.

“She took ownership of the idea,” Scott says. “She was the den mother to everyone, even me.

“She was the only one who thought a silly class project could actually lead to a lot more.”

Westberg says meeting Scott was one of the highlights of winning the award.

"She's just so inspirational," Westberg says. "I hope I can do something like she has done."

The Nashua, N.H., native plans to return home after graduating with a degree in international students and minors in public relations and leadership studies. She will work this summer for an outdoor company before joining the sales team at Nestle.