Tracking mercury in the sea 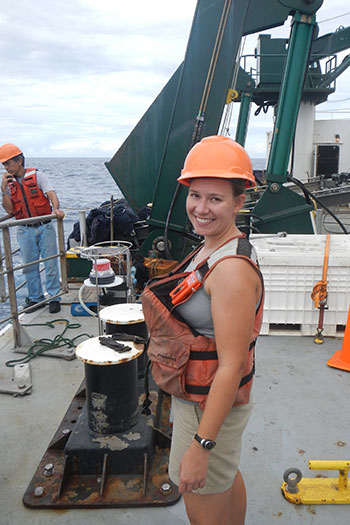 Blaire Umhau joined UofSC's marine science program in 2013 after earning her bachelor's degree in marine science and chemistry from the University of Miami.

You’re taking chances if you eat a lot of fish, and mercury is the reason why.

“If you’re buying, say, a can of tuna at the grocery store, it’s sort of like Russian roulette,” says Blaire Umhau, a graduate student in the marine science program who is studying the toxic metal in the ocean. “You might get one that’s super-contaminated or you might get one that’s fine. It really depends.”

The situation led the Food and Drug Administration to issue a draft advisory in 2014 aimed at pregnant women and young children. It’s a complicated list of guidelines that, especially if you’re a sushi-lover, should probably be posted on your refrigerator, even if you’re an adult with no pregnancy in the foreseeable future. Because when it comes to mercury and its health risks, uncertainty abounds.

For marine scientists, the uncertainties run even deeper. Although the sources of mercury contamination are well understood, the details of how it wends its way through the ocean before being taken up by living creatures are not nearly as clear, Umhau says, and she is bent on helping clarify the situation.

As a large body of research has shown, mercury contamination in fish is in large part one of the consequences of human use of fossil fuels: When power plants burn a fossil fuel, particularly coal, trace impurities of mercury in it are released into the air. As a volatile gas, it can move upward in the atmosphere and be widely dispersed by air currents. Eventually deposited on microscopic particles in the atmosphere, mercury will in time fall back to the surface in precipitation.

Because 70 percent of the Earth’s surface is covered by water, mercury can easily find its way into the oceans, even if the contaminating source is far from the coast. And that’s where things get murky, Umhau says.

“Before it gets up into the food chain, there’s not a lot known about mercury,” Umhau says. “Once it gets into the ocean, it’s sort of a big black box, where we don’t really know what happens to it.”

As a doctoral candidate in professor Claudia Benitez-Nelson’s lab, Umhau is working to understand how the tiny, mercury-contaminated particles that drop from the sky work their way to the depths. At any point along the way, they might be taken up by microscopic species, such as phytoplankton or algae. That starts the process of bio-accumulation. Mercury is retained in living creatures for a long time, rather than being quickly excreted like many other toxic materials, and it works its way up the food chain. Each step up the chain tends to concentrate it even further. Bio-accumulation leads to long-living top predators, such as swordfish and sharks, often having very high levels of mercury contamination.

Before it gets up into the food chain, there’s not a lot known about mercury. Once it gets into the ocean, it’s sort of a big black box, where we don’t really know what happens to it.

Benitez-Nelson’s team, in collaboration with researchers from the University of Hawaii and the University of Michigan, has been collecting particulate samples in the Pacific Ocean, and Umhau has taken part in three cruises originating from Hawaii so far. Last June, for example, she was aboard the R/V Kilo Moana, which traveled about 60 miles north of Oahu to Station ALOHA, which Umhau likens to a “national park for science.”

Encompassing a circle six miles in radius, the deep-water site hosts a variety of research projects. The R/V Kilo Moana cruised through the area and deployed buoys with particle collectors and pumps that sampled at varying depths.

The data collected from that and other cruises over the past two years are helping them understand the many variables that go into mercury’s potential journey from the surface of the ocean into a game fish that might end up on a dinner plate thousands of miles away. Umhau presented some preliminary results at a conference in New Orleans in February showing how seasonal changes can have a large effect on the flow of mercury downwards in the water column. Insight like that, coupled with knowledge about marine species’ behavior over the same time periods, will go a long way toward fully defining the movement of a serious health threat through the environment and into the human food supply.

Umhau considered applying to a maritime academy for undergraduate work as a gateway to a career at sea before deciding instead to study marine science and chemistry. She says all of the long days she has spent on research vessels as a graduate student were time well spent.

“The cruises are a lot of work. I probably got about four hours of sleep a day over the last three days last June because we deploy stuff 24/7 and there’s always something going on. So there’s not a lot of sleeping happening,” Umhaus says. “But they’re so much fun. That’s the reason I decided to do marine science, so I could go to sea, so for me it’s the best thing in the world.”