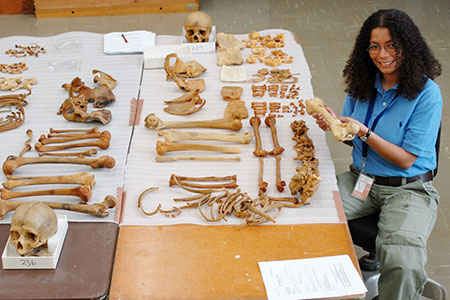 Carlina de la Cova, pictured here at the Smithsonian, joined the faculty in 2011, with a dual appointment in anthropology and African American Studies.

Many people have contributed to the creation of modern forensic science — and many did so unwittingly. Anthropologist Carlina de la Cova is part of a new generation of forensic scientists who want to do something about that.

De la Cova’s research in biological anthropology often involves working with skeletal collections that were typically put together during the first half of the 20th century. She has made extensive use of the Hamman-Todd collection, for example, which comprises more than 3,100 individual skeletons and was assembled by professors of anatomy at what is now Case Western Reserve University. The skeletons were prepared from cadavers starting in 1893 and are now held in the Cleveland Museum of Natural History.

According to de la Cova, Hamman-Todd and similar collections were crucial to the development of modern forensic science.

“These skeletons have given us the basic human identification techniques in our discipline,” de la Cova says. “They have been used to create the methods to identify sex, to identify age, to assess ancestry in this country from skeletal remains.”

De la Cova knows about those techniques firsthand, using them in the field in her position as a deputy coroner for Richland County and as a forensic consultant in other states.

The osteological collections that have proven to be indispensable to her discipline and to the detectives she supports do not, however, contain the remains of civic-minded individuals who donated their bodies to science. Rather, they represent in large part the final resting place of people of little means who died far from home.

In the collections de la Cova has studied, bodies that were not claimed by relatives within 24 to 32 hours were sent to medical schools for dissection, she says. Some of those were then selected by the anatomists for preservation in their collections.

De la Cova has spent time further identifying the individuals, working from their names and the hospitals from which they originated.

“They were indigent, they were immigrants, they were in-migrants,” she says. “In fact, a lot of the African-Americans I’m finding in these collections were part of the Great Migration.”

The first wave of that large-scale movement of black Americans out of the South took place roughly between 1910 and 1930. “I’m finding that 32 to 40 percent of the white females, in the collections I’ve worked with, were in mental institutions,” she says.

De la Cova is burnishing the dataset of these canonical collections, adding information about individuals, such as institutionalization status or medical histories, that perhaps ought be taken into account when forensic scientists estimate things like height, weight or age from skeletal observations or measurements. She thinks there might be fine details in individual skeletal histories that have the potential to make forensic predictions even more precise.

But she's also trying to develop with her colleagues a better sense of how to ethically work with the collections.

“They’re not skeletons, they’re people to me, because for some of them I know their stories,” de la Cova says. “I feel it’s my duty to tell the story of these individuals.

“In the early history of the discipline, they were objects to be studied, to be objectified. The newer generation of bioarchaeologists, of biological anthropologists, are pushing beyond that. The folks that we study, we have to think about who their descendants are, and we have to actively engage in discussions with their descendants. That’s the way the discipline is now moving.”