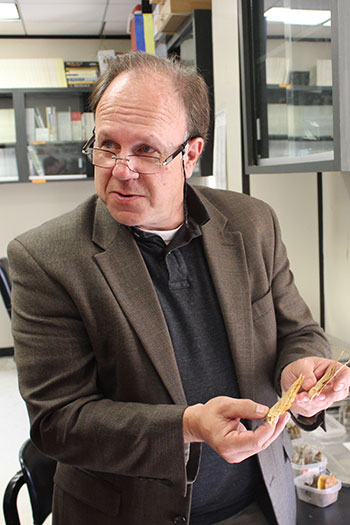 Tim Mousseau, director of the Chernobyl + Fukushima Research Initiative, joined the faculty of the University of South Carolina in 1991 after earning a Ph.D. at McGill University and completing a postdoctoral fellowship at The University of California, Davis.

It was 30 years ago that a meltdown at the V. I. Lenin Nuclear Power Station in the former Soviet Union released radioactive contaminants into the surroundings in northern Ukraine. Airborne contamination from what is now generally termed the Chernobyl disaster spread well beyond the immediate environs of the power plant, and a roughly 1000-square-mile region in Ukraine, Belarus and Russia remains cordoned off, an exclusion zone where human habitation is forbidden.

The radiation spill was a disaster for the environment and its biological inhabitants, but it also created a unique radio-ecological laboratory. University of South Carolina professor of biological sciences Tim Mousseau and longtime collaborator Anders Møller of the CNRS (France) recognized that the Chernobyl Exclusion Zone, which comprises areas with a wide range of background radiation levels, was essentially the first place in the world where it would be possible to study the effects of ionizing radiation on animals living in the wild.

Since the atomic bomb was developed during WWII, laboratory testing has been used to assess toxicological effects of ionizing radiation on life, but Mousseau and Møller wanted to examine the effects on free-ranging organisms. In contrast to their laboratory brethren, wild animals have to forage for food and fend for themselves, likely leaving them more vulnerable to new stressors. With that in mind, Mousseau and Møller began studying the natural inhabitants of the Chernobyl Exclusion Zone in 2000. Their scope expanded after Japan’s Fukushima disaster in 2011, and they have established the USC Chernobyl + Fukushima Initiative, through which they and colleagues have now published more than 90 peer-reviewed papers.

Their work has shown a wide range of damaging effects to wildlife that result from chronic radiation exposure, even when the exposure is at low levels.

“As a starting point for our studies of animal populations, we took our cue from the medical literature—one of the first effects observed was the presence of cataracts in the eyes of people exposed to energy from atomic bombs,” Mousseau says. “And we found that both birds and rodents show elevated frequencies and degree of cataracts in their eyes in the more radioactive areas. Nowadays, we see higher rates of cataracts in flight crews who spend a lot of time in airplanes, which expose them to extra radiation. And people who work in radiology fields are more likely to show increased prevalence and degree of cataract formation in their eyes.”

The team also showed that radiation in Chernobyl diminished brain size, increased incidence of tumor formation, affected fertility and increased the prevalence of developmental abnormalities in birds. And the effects on individuals propagated through groups as well. Populations of barn swallows, for example, which were particularly hard hit in Chernobyl, were lower in areas of higher contamination, and Mousseau thinks they likely would have died off without immigration of new individuals from uncontaminated areas.

“That’s something we tested. Using an isotopic method that shows geographic origin, we compared feathers of barn swallows in the contaminated areas with museum specimens from before the accident and found much more heterogeneity after the accident,” Mousseau says. “Most populations are in some kind of equilibrium, teetering on this balance between the effects of birth and death. If the environment changes for the worse, it pushes them toward extinction, and with all of these negative fitness consequences, that’s what we see: the populations pushed to smaller sizes because the deaths were outweighing the births. But secondarily, in many of these populations what we’re probably seeing is actually a reflection of births, deaths, and immigration. These populations would be locally extinct if it were not for constant immigration.”

And in a recently published paper in Science of the Total Environment, Mousseau and colleagues presented a meta-analysis of oxidative damage resulting from ionizing radiation. Radioactive contamination can have direct effects on, say, chromosomes or DNA, but its energy can also ionize other species in the biological milieu, such as ubiquitous water to form peroxide. The resulting oxidative stress can cause a range of biochemical effects.

“One of the messages coming through our research is that this secondary mechanism through oxidative stress appears to be fairly commonly observed,” Mousseau says. “We have many examples now, both from other people’s research and our own, that shows that there does appear to be some sort of tradeoff between the quantity of antioxidants in the organism’s body and its ability to defend itself against the effects of ionizing radiation.”

The protectiveness of antioxidants in the face of ionizing radiation might part of the explanation for why some populations are less susceptible to radioactive contamination than others, Mousseau adds. “Species that can somehow adjust the use of antioxidants may be using this as a means to reduce genetic damage.”