Imagine going to a concert with your best friend who uses a wheelchair and learning the only seats accessible to you were at the extreme rear of the arena. That’s the situation Carolina students Sophie Keyes and Martha Childress found themselves in.

The experience led Keyes, a senior broadcast journalism major from Clinton, South Carolina, to make accessibility for people with disabilities the focus of her platform as she competes in pageants. As Miss Greater Easley, she will spotlight the Americans with Disabilities Act at the Miss South Carolina competition in late June. 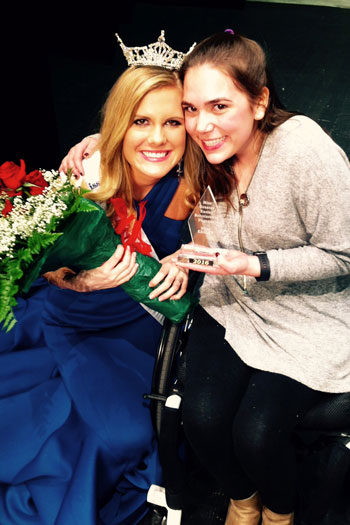 Sophie Keyes will compete for Miss South Carolina in late June. A Carolina friendship led the senior to make disability access the focus of her pageant platform.

Keyes said she became familiar with the issues surrounding people with disabilities because of her father’s involvement with the South Carolina School for the Deaf and Blind. However, it was seeing the lack of accommodations for her best friend at a concert that led her to become an advocate for people like Childress.

“For me, there’s no difference between me and Martha,” Keyes said, “It really opened my eyes about how society doesn’t know how to treat people with disabilities in a way to make them feel comfortable and not put them in a box.”

Keyes and Childress, a rising senior marketing and management major from Greenville met freshman year during sorority recruitment and quickly became good friends. Two months later, in October 2013, Childress was struck by a stray bullet while waiting for a taxi in Five Points, leaving her paralyzed from the waist down. The two women remained close, bonding over their love of Nick Jonas, and eventually became roommates.

“We would watch movies, eat Insomnia Cookies and just have real conversations,” Keyes said. “I needed her just as much as she needed me because she was one of the first friends I knew would be in my life forever.”

While Keyes said Childress’ injury is not the focus of their friendship, she wants to be able to do things such as attend a concert together without worrying about whether they would be able to sit next to each other.

As Miss Greater Easley, Keyes has been able to visit numerous public venues to spread the word about compliance with the Americans with Disabilities Act. She hopes to be able to make even more of a difference during the Miss South Carolina pageant.

“If I were to be crowned, I would like to move forward on a more national level. My main focus is promoting the individuals who need to be able to enjoy the show just like everyone else,” Keyes said.  “I think the pageant system has given me a voice to have a platform because I realized that when you put on a crown, people pay attention to you and want to hear what you have to say.”