Just after two years of singing and harmonizing together, Preston Residential College’s own a cappella ensemble, the PresTones released an album. The two-track EP called “The PresTones-Volume 1” was released June 13. “We Hail Thee, Carolina” and “Irish Blessing” are on the album.

Co-leader of the PresTones and rising junior, Daniel Titus, says both of these songs had importance to the group.

“The school song is pretty important to us, and we sing at it everything,” says Titus. “And the ‘Irish Blessing’ song, our dorm president, Dr. (Bobby) Donaldson, left this year. He is working with someone else now. At this year’s party, we sang the ‘Irish Blessing’ for him and it was just a heartfelt goodbye from us personally.” 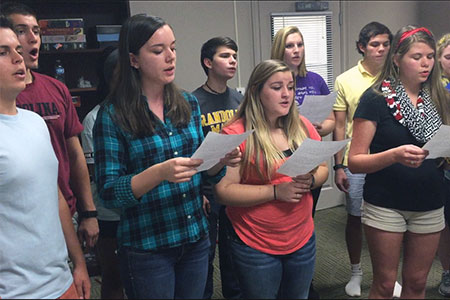 Members of the PresTones prepare for their next show.

The PresTones recorded the songs at the School of Music.

Some members of the group were new to a cappella, but were very familiar with these particular songs because they perform them at events throughout the school year. The group performs at mostly Preston events, but has branched out recently to events, such as the Cockapella concert.

To get ready for shows, the group practices about twice a week whenever it works with everyone’s schedule and has grown into a cohesive, supportive unit, says PresTones founder, director and rising junior Derek Ritschel.

“No one is knocking down anyone else,” he says. “One of my main goals in the beginning of the year was by the end for everyone to be friendly with each other and for everyone to know each other. And as I looked around the room in the last practice, there was a real sense of camaraderie between everyone. That’s something that I’m really happy that the PresTones was able to achieve.”

Ritschel founded the group his freshman year in Preston. He found success with his former a cappella group, the WhipTones, while he was in high school and wanted to bring that to the University of South Carolina.

“When you go through the halls of Preston, you hear people singing who leave their doors open. And I recognized there was a lot of great voices and so from there it came together,” says Ritschel.

The group went from eight members initially to 16 this past year. 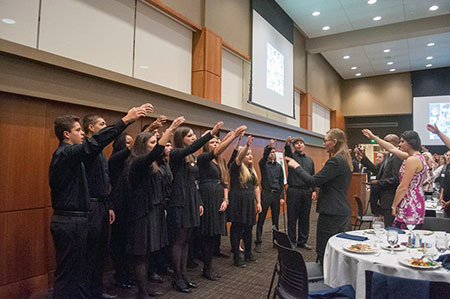 At the 20th anniversary of Preston, the PresTones perform "We Hail Thee, Carolina."

“The phrase that comes to mind with the PresTones is ‘upward mobility.’ Becoming a great a cappella group takes time, but I think the PresTones has what it takes to do that,” says Ritschel.

Because Titus will be one of the co-leaders for the next school year, he has started working on plans to help the group continue to improve.

And even though Ritschel will be in New Jersey for a co-op during this upcoming school year, he wanted to release this album especially for his fellow PresTones.

Listen to the PresTones' new album.