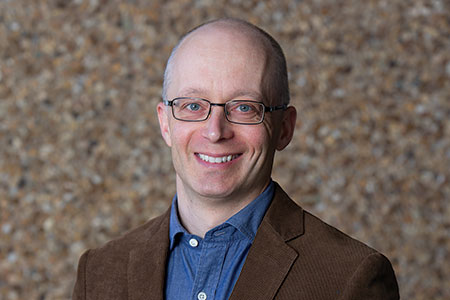 Matthias Schindler joined the Department of Physics and Astronomy in 2011. He completed his doctoral studies at Johannes Gutenberg University of Mainz (Germany) and held postdoctoral positions at Ohio University and the George Washington University.

In everyday life, it’s easy to tell the difference between left and right and past and future, but most physical laws make no such distinction. Physicists call this parity and time-reversal invariance. It is the few exceptions from the norm, however, that are one of the reasons why we and the universe we live in exist.

Matthias Schindler, an assistant professor in the physics and astronomy department, uses parity and time reversal as tools to better understand details of the nuclear force, which underpins nuclear power. Since arriving at the University of South Carolina in 2011, Schindler has established himself as a leader in this field, garnering a highly competitive $750,000 Department of Energy Early Career Research Award.

“He is already an international star,” says Milind Purohit, chair of the physics and astronomy department. And research success has not come at the expense of teaching. Schindler’s graduate courses have elicited rave reviews, and he has co-authored a graduate-level textbook.

“We are studying tiny effects that require enormous efforts to even be seen in the laboratory,” Schindler says. “But they have immense consequences—our universe and everything in it exists because of them.”

Despite being a theorist, Schindler is also a member of experimental collaborations, providing theory support to the experimental effort in fundamental neutron physics.

In 2012, he co-authored, with Stefan Scherer of Johannes Gutenberg University of Mainz (Germany), a graduate-level textbook in the Springer Lecture Notes in Physics series, "A Primer for Chiral Perturbation Theory." He received the first Few-Body Systems Award by the European Research Committee on Few-Body Problems in Physics in 2013.

Schindler was one of two local organizers of the 81st annual meeting of the Southeastern Section of the American Physical Society, which brought more than 200 physicists from around the world to Columbia in 2014.