Nanotechnology you can see 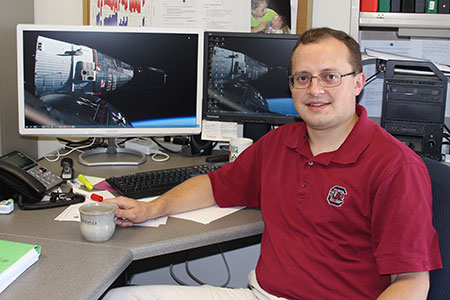 Andrew Greytak recently purchased a quantum dot-enhanced LCD computer monitor (left) that has noticeably better performance than a traditional LCD display (right). The company that produced the quantum dot monitor has licensed a patent Greytak received for some of his postdoctoral research at MIT.

Consumers are getting a taste of something new with quantum dots, a nanomaterial that is rendering particularly rich colors on some recently released electronic devices.

“A number of companies are offering quantum dot based displays in various forms, both for computer monitors and televisions and also for handheld devices like versions of the Kindle Fire,” says Andrew Greytak, a faculty member in the department of chemistry and biochemistry. “The quantum dot TVs are probably the first situation where the average consumer has encountered them. It’s exciting to see this, to see real nanotechnology coming into the marketplace.”

The effects of quantum dots — the bright reds, greens and blues they can produce on a screen — are easy to see, but the dots themselves are not, because they are so small. Quantum dots are a kind of nanoparticle, which is a tiny solid with dimensions that measure in the nanometer (one-billionth of a meter) range.

And among nanoparticles, quantum dots are an even more specific subspecies. Quantum dots are nanoparticles that exhibit changes in some of their fundamental properties when very small particles, usually under 20 nanometers in diameter, are prepared. When that property is fluorescence, a form of light emission, it turns out to be very useful for people trying to design color displays.

With traditional LCD color technology, though, the situation is imperfect. The primary red, green and blue sub-pixels are not, in a manner of speaking, pure. If you look at the spectrum of light wavelengths that the red sub-pixel emits, for example, there’s a little “bleed” from the center of the red part of the spectrum into other colors.

But with quantum dots, engineers have an ideal palette of materials to work with in putting together a display screen.

“The unique thing about quantum dots as light emitters is they have a very narrow and tunable emission spectrum,” Greytak says. “By adjusting the manufacturing process to control the size of the quantum dots, they can put that emission peak wherever they want, so you can end up with a series of saturated red, green and blue colors.”

And the manufacturing process for quantum dots is getting a boost from Greytak’s research, which is focused on their surface chemistry. It’s a crucial element of their makeup that can influence their performance.

In a paper recently published in Chemical Science, his team followed up on some earlier pioneering work in size-exclusion chromatography, which they use to both purify quantum dots and change their surface chemistry.

“Previously, we showed that this technique could work very effectively with some of the most common examples of quantum dots, and now we’ve shown that this is a very general approach that can be used for a wide variety of nanocrystalline materials,” Greytak says. “This includes core-shell quantum dots, where you have a different material at the core and the surface. We can purify metal nanocrystals, like gold, that have applications in sensors and cancer therapy. And we can also purify indium phosphide quantum dots.”

They’re adding calorimetry to their toolkit as well. A recent $400,000 grant from the National Science Foundation will support a thermodynamic approach to studying how molecules bind to the surface of quantum dots and other nanocrystals. And the potential applications for their research go beyond color viewscreens.

“We’d like to be able to do more sophisticated things with quantum dots, like with solar cells,” Greytak says. “If you look at the performance of quantum dot based solar cells, it’s been increasing rapidly, but it’s still only about 50 percent of where it should be based on theory. It’s very important to understand what we’re actually looking at in these systems so we understand how to make improvements.”