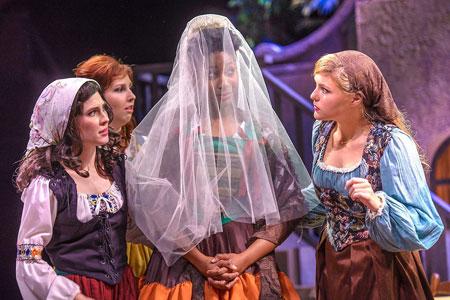 Emily Mason (far right) performs in a production by Opera at USC.

Emily Mason likes to see the light bulb go off. That’s what she calls it when a person discovers her passion.

For Mason, the light bulb went off when she was 6 years old and realized she loved to sing. And she was good at it — very good, in fact.

Teachers encouraged her to take additional lessons to hone her alto voice, which she did by enrolling in an arts magnet school in her hometown of Charlotte, N.C.

When the time came to pick a college major, she says it was a no-brainer — voice performance with the goal of teaching music to elementary school students. Mason hopes one day to use her voice to encourage the next generation.

While choosing a major was easy, deciding on a school was hard. The University of South Carolina had everything she wanted: a large, state-supported school close to home, with SEC football and the opportunity for a vibrant social life and, most importantly, an excellent music program. But as a child from a single-parent home, money was tight, so Mason had to find a way to afford school. A scholarship funded with the proceeds of the Cornelia Freeman Concert Series solved her problem.

Mason was relieved when she received the scholarship because she felt home at Carolina's School of Music. “I can be on stage, by myself singing, but feel like there’s a whole community supporting me,” she says.

Attending Carolina gave Mason the opportunity to travel abroad. Last year, she went with the concert choir to Germany, Austria and the Czech Republic. This fall, as a senior, she will perform in the Sondheim opera, “Sunday in the Park with George.”

The Cornelia Freeman Concert Series, named in honor of a longtime donor and supporter of the School of Music, had long been an autumn fixture on the School of Music’s calendar. This year, the series merges with the Chamber Innovista and expands with dates throughout the year.