Pop quiz: How many times does an average undergraduate change majors?

If you answered “one” or “two,” you might be thinking of your own experience years, even decades ago. Today, roughly three-quarters of students change their major at least once — and many change three to five times. 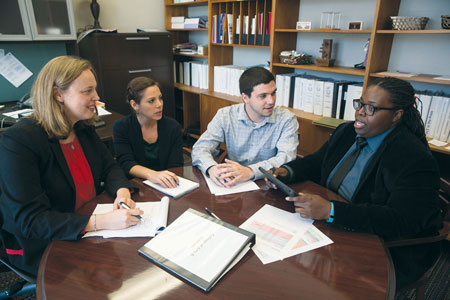 “Our goal is to help retain students and help them move into their sophomore year. And to reduce time to degree — advising students to make intentional choices about major changes and major selection.” — Claire Robinson, director of the Advising Center.

Given that reality, it’s more important than ever for universities to help students navigate the advisement process. That’s exactly what the University of South Carolina is doing at the University Advising Center, which opened in July in the Close-Hipp Building.

Part of a university-wide change in advisement philosophy, the standardized process focuses particularly on first-year students, transfer students, change-of-major students and students seen as at-risk due to a variety of factors. The larger goal is to improve retention and on-time graduation rates.

Compared to national averages, USC is already doing quite well on both fronts. According to the U.S. Department of Education, 87 percent of students at the Columbia campus return after their first year (compared to 67 percent nationally), and the campus has a 73 percent graduation rate (compared to a national average of 43 percent). But the goal is to do even better.

“The Board of Trustees has charged USC with getting to a 90 percent first-to-second year retention rate,” says Claire Robinson, director of the Advising Center.

“Our goal is to help retain students and help them move into their sophomore year,” Robinson says. “And to reduce time to degree — advising students to make intentional choices about major changes and major selection.”

Last year, the university released a report, “Re-envisioning Academic Advising at the University of South Carolina,” which found wide variation in the advisement process. Some colleges had as many as 800 students for every adviser. That’s compared to a 300-to-1 level recommended by the National Academic Advising Association. As part of that report, researchers conducted a campus-wide survey.

“We asked our 12 colleges and schools, ‘How do you currently advise students?’” recalls Robinson, who earned her Ph.D. in higher education administration from USC. “We saw that some had a complete faculty model, while others had a complete staff model, with a centralized advising office in their college, like the Darla Moore School of Business does. Then we found everything in between.”

The same survey found that adviser training varied widely, with 30 percent saying they didn’t feel well trained for the role. Most sessions lasted 15 minutes or less, and most students had only met with their adviser once per semester.

“The survey revealed that all 12 colleges and schools handle advising differently,” Robinson says. “It’s confusing for a student who is leaving one college and entering another. The student’s experience and expectations are very different because you got advised one way in School A and another way in School B.”

As for students’ perceptions of advisement at USC, 67 percent reported being satisfied — but that left 33 percent who weren’t.

A World to Explore

Collin Stout, a major change adviser at the University Advising Center, changed his major five times as an undergraduate at New York’s College at Brockport. “I changed it way too many times,” he laughs — but that experience, while not unique, does give Stout an empathetic ear.

“I try to build a rapport, get to know them, ask questions about classes they have really enjoyed and what kinds of things they are involved in, what they wanted to do when they were in high school, what their dream job is,” Stout says. “If they think their dream job is not possible — well, maybe there are some avenues to get there.”

According to a 2012 New York Times article, there are several reasons why students change majors so often, including an explosion in the number of programs offered and concerns about which majors will prove to be viable and lucrative.

“We see a lot of major exploration: ‘I’m not really sure what I want to do,’” says Mary Katherine Robinson, a major change and transfer adviser at the Advising Center. “Either they came in with an undecided major, or they know that they don’t want to do the major they’re in, but they’re not sure what they do want to do. We work through what their interests are, what their strengths are, what their skills are.”

Students who change majors are not the Advising Center’s sole focus. Much of the shift is aimed at first-year students (more than 5,000 each year), transfer students (approximately 2,100 per year) and at-risk students (those on academic probation, etc.).

Whether they’re coming to the university as true freshmen or as transfer students, Advising Center Director Robinson says she wants the university to provide “a seamless advising experience.”

I try to build a rapport, get to know them, ask questions about classes they have really enjoyed and what kinds of things they are involved in, what they wanted to do when they were in high school, what their dream job is. If they think their dream job is not possible — well, maybe there are some avenues to get there.”

One tool in creating that seamless process is a new software system developed by the Education Advisory Board. The software gives advisers easy-to-access information about each advisee — such as risk scores based on student records.

“It provides a quick, at-a-glance snapshot of some of the most important information that an adviser needs — like how many times did a student withdraw from a class, or if they have missed what’s called a ‘success marker course,’ where we know that a certain grade threshold predicts their level of success in that particular major,” Robinson says.

It’s a big change from the past, when an adviser would pull a student’s transcripts and try to search for meaningful patterns.

While the Advising Center focuses on specific areas — students changing majors, transfer students, academic coaching, etc. — regular academic advisement will still happen in the student’s college or school. The difference is that students will meet with advisers who have been trained to a common set of standards. With the hiring of new advisers, the goal is a 300-to-1 adviser-to-student ratio.

“A first-year engineering student will get advised in Swearingen, in the College of Engineering and Computing,” Robinson says. “The first-year advisers have a standard set of expectations, training, technology and resources —  all the things the Advising Center coordinates — but the advising still happens in the departments.”

First-year students will get special attention. To help facilitate that, USC is hiring 25 advisers specifically dedicated to them. Most will work within specific colleges and schools, while several work in the Advising Center.

Despite being a new office, the center has received national attention. “I am constantly contacted by other universities interested in using our advising initiative as a model,” Robinson says.

One of the new first-year advisers is Drew Savage, who is working toward a master’s in higher education administration at USC. Savage speaks passionately about connecting with advisees, some of whom he meets initially through the University 101 course he teaches. “I know what it’s like to be a first-year student — to be lost on campus,” he says. “I want to create an environment where they can tell me what’s wrong.”

But Savage is also interested in the additional potential of advising software. “I am a data nerd — I love statistics,” he says, calling the challenge of improving retention rates “an incredible opportunity.”

Human interaction informed by the latest technology — that’s exactly what Robinson wants the new center to provide. “There’s an art and science to great advising,” she says. “The science is you’ve got to know all the curricular requirements, rules, regulations, policies, procedures, etc. Then there’s the art: How do you translate all this information in a meaningful meeting with a student, such as the type of questions advisors ask, the points emphasized, knowing that each student has a unique story.”

This story first appeared in the April edition of USC Times.