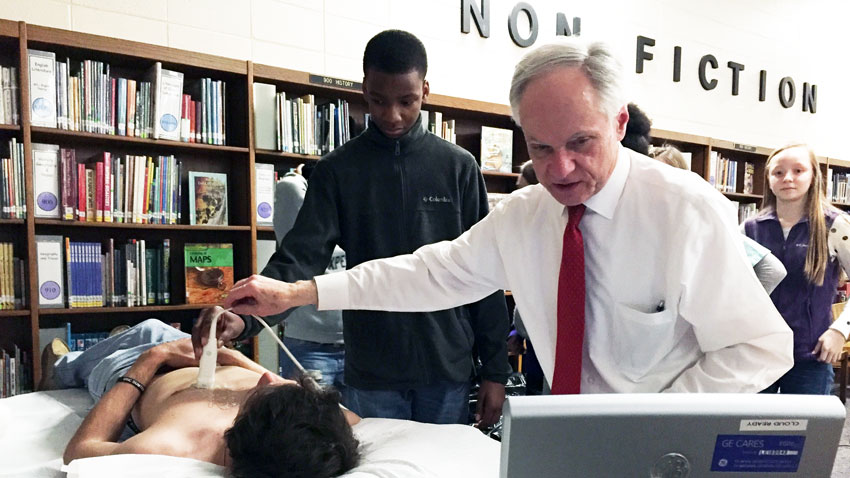 Lying on an emergency room examination table, the young woman appeared wan. She had gone to a doc-in-the-box with symptoms of a urinary tract infection, then to a hospital ER when the pain worsened. The symptoms temporarily abated and she returned home only to end up back in the ER a few hours later.

The back-and-forth shuffle might have continued — ER staff were thinking about letting the patient go home again because she was feeling a little better — except that a medical student decided to do a quick scan of her kidneys with an ultrasound scanner. Holding a device about the size of a shaving razor, the intern guided the transducer across the patient’s back, pausing to scrutinize internal images of each kidney on a small screen.

He suddenly stopped the transducer over one spot and slowly went back and forth as the outline of a kidney stone nearly the diameter of a bottle cap came into view.

“There was no way she could have passed that stone — 1.7 centimeters,” says Sam Scoma, a third-year student at the University of South Carolina’s School of Medicine in Columbia who watched a classmate perform the ultrasound scan. “She came pretty close to getting in real trouble.”

The stone was broken into smaller pieces, then removed with a probe. The patient returned home, this time for good — and free of pain. 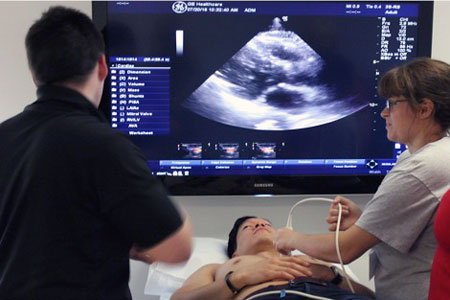 “It’s fascinating to be part of a movement that’s bringing ultrasound to medical education. It’s opened my eyes to where technology in medicine is going.” — Sean Christensen, a fourth-year School of Medicine student from Greenwood, S.C.

First in the nation

From the start of their medical studies, students in the School of Medicine in Columbia begin learning to use ultrasound, which can image all major organs, as well as joints and blood vessels, at the bedside. It’s one of the school’s distinctions, being the first institution in the nation to integrate ultrasound instruction into all four years of its curriculum.

Often called the “stethoscope of the 21st century,” ultrasound scanning has been around since the 1960s when it was mostly used for obstetrical exams — the first peek at an unborn baby. Since then, the scanners have shrunk in size, the imaging has sharpened and ultrasound’s use has spread into several medical disciplines, including cardiology, family practice and orthopedics. It has become the No. 1 medical imaging modality in the world.

The idea to teach the university’s medical students how to use the technology started in late 2005 when two emergency room physicians approached Dr. Richard Hoppmann, then the associate dean for medical education. A rheumatologist by training, Hoppmann wasn’t familiar with all of the advancements in ultrasound, but he was impressed when he saw what a portable scanner could do.

“It was pretty clear from that meeting that there would be a lot of opportunities to incorporate ultrasound into anatomy, physiology and many other disciplines,” Hoppmann says. “I’ve always considered myself a teacher first, and it was just so obvious what a fabulous tool ultrasound is to look inside the body and see how it works.”

Things moved quickly when executives from GE, a leading manufacturer of ultrasound scanning technology, met with School of Medicine administrators. Impressed by their commitment to the initiative, the company permanently loaned 25 laptop-sized scanning machines to the school, and ultrasound became part of the teaching curriculum in fall 2006.

“I’m a big believer in going from good to great and finding those things you can be great at when there’s opportunity,” Hoppmann says. “It looked like this was where medicine was going to go, where education was going to go, so we really seized the opportunity.”

In the 10 years since ultrasound education began at the School of Medicine, the technology has continued to improve. One version of the device now fits in a shirt pocket and attaches to a smart phone screen. The scanners have become easier to use, and students are intrigued by the possibilities they see.

“It’s fascinating to be part of a movement that’s bringing ultrasound to medical education,” says Sean Christensen, a fourth-year School of Medicine student from Greenwood, S.C. “It’s opened my eyes to where technology in medicine is going.”

Christensen recently finished a rotation in internal medicine where he saw the gamut of routinely used diagnostic tests, such as PET and MRI scans and the common X-rays. Ultrasound imaging can’t replace those methods in every situation, but when it can, ultrasound is less expensive and doesn’t expose patients — especially young children — to ionizing radiation, which can increase the long-term potential for cancer.

“You can get similar results for some tests with ultrasound — and without the radiation,” Christensen says. “And there are ways to use ultrasound that don’t seem obvious at first. I’m very interested in psychiatry, and I see where I could use ultrasound to diagnose mitral valve prolapse, a heart condition that can make anxiety symptoms worse.”

“We had a child at the hospital and were trying to figure out why he was having breathing difficulties,” she says. “Because it’s noninvasive and not painful, ultrasound made it easier to look at his lungs. I love what it has done for me in terms of my education. On a practical note, ultrasound has helped me avoid having to do X-rays on a child, which is never fun.” 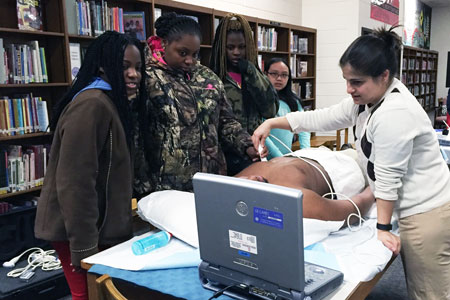 Since leading the School of Medicine to its pioneer status as the first medical school to integrate ultrasound education in its curriculum, Hoppmann has been spreading the ultrasound gospel around the world.

He was instrumental in founding the Society of Ultrasound Medical Education (SUSME) in the U.S., and led the School of Medicine in hosting the first two World Congress of Utrasound in Medical Education events.

“Ninety percent of the world’s population doesn’t have access to MRI or Cat scans,” Hoppmann says. “Ultrasound is portable, the technology is far less expensive and primary care physicians can be trained to use it at bedside. Physicians can use the portable devices in remote locations to make quick point-of-care diagnoses that can improve care and save lives.”

Hoppmann has also cultivated a partnership between SUSME and the Italian-based World Interactive Network Focused on Critical UltraSound. He’ll serve as president of that organization next year. In Columbia, Hoppmann is the Dorothea H. Krebs Chair of Ultrasound Education at the School of Medicine and director of the school’s Ultrasound Institute.

What really excites him, though, is rolling up his sleeves and teaching others what ultrasound can do. Airport High School science teacher Stephanie Bailey, a USC marine science alumna, has participated in an 18-month program that introduced ultrasound to her students.

“We talked about a case study of an athlete collapsing on the field and the genetics of heart defects,” she says. “Students will sometimes ask, ‘Why do I have to know this?’ Looking at the heart with an ultrasound shows them the relevance — this isn’t just stuff in a textbook.”

Bailey has taken her AP students to the Ultrasound Institute where medical students serve as models for ultrasound views of the heart, inferior vena cava, liver, knees and carotid artery. “They get excited because it brings the real world to them,” she says.

Sumter middle school science teacher Jill Madsen says the program has made anatomy and physiology come to life for her seventh-graders and also pointed toward possible careers. “I tell them they can learn to do this. Some of them will be doctors and nurses. And some of them could be ultrasound technicians,” she says.

Julian Greer is in only her second year at the School of Medicine but already thinking about how she might incorporate ultrasound into medical practice down the road.

“My father is a family practice physician and he’s rented an ultrasound probe, not for diagnostic purposes but purely for education,” says Greer. “I’ve already seen how it can be used to see carotid artery stenosis or nodules on the thyroid or arthritis in the knees.”

I’ve always considered myself a teacher first, and it was just so obvious what a fabulous tool ultrasound is to look inside the body and see how it works.

Dr. Richard Hoppmann, Dorothea H. Krebs Chair of Ultrasound Education at the School of Medicine and director of the school’s Ultrasound Institute

Greer has spent a fair amount of time just learning how to hold an ultrasound scanner, but as the technology becomes easier to use, students at the school will spend less time learning how and more time interpreting what they see, Hoppmann says.

The future of ultrasound education might also include some serious gaming, Hoppmann says. The Ultrasound Institute is collaborating with game developer Karl Kapp to come up with ways to inject a little fun into the task of learning how to use the technology. Current medical students, practicing physicians and nursing and physician’s assistant students would benefit from the approach.

All gaming aside, the School of Medicine’s leadership in ultrasound education is a feather in the cap of the university, Hoppmann says.

“One of the things that drives this, for me, is that it’s not just an opportunity for me and the School of Medicine but for the university and the state, as well,” he says. “Some people make the comment, ‘Who would have thought that a relatively small and young medical school in South Carolina would be leading this charge?’ That’s one of the things that I find very satisfying.”