Losing green up the stack 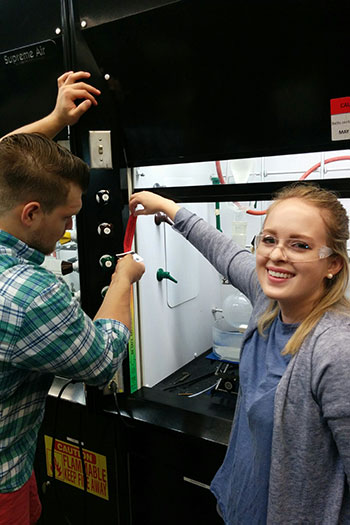 Andrew Pingitore and Julia Pribyl install a sash minder in a fume hood in the Horizon I building.

Fume hoods are an essential feature of many laboratories. They provide an enclosed workspace, typically the size of a large desktop, for mixing chemicals that give off noxious vapors, which are whisked out of the building by the ventilation system.

“Each hood costs about as much as a house does a year to power,” says chemistry graduate student Andrew Pingitore.

That’s because whatever volume of air that the hood vents out of the building must be equalized by the same amount of fresh air brought into the building. The fresh air must be conditioned to the building’s temperature, and according to a study by Harvard’s Office for Sustainability, the costs for operating a typical hood in one academic research building on their campus was more than $3,000.

What’s more, whoever is using the hood has a lot of control over how much its tally might come to. Most fume hoods have a sash that you can raise or lower as needed to work therein, and when it’s up, the hood is fully open and draws maximum airflow through it. The Harvard study showed that a “Shut the Sash” initiative to encourage lab workers to make it a habit to keep the sash down unless necessary cut the electricity bill per hood from $3,000 to $1,800.

The potential for that kind of savings is what a graduate student organization of polymer and materials scientists, the American Chemical Society Poly/PMSE chapter at USC, had in mind when they kicked off an energy conservation initiative for the Department of Chemistry and Biochemistry on August 29.

The outgoing president, Mitra Ganewatta, convinced the Fisher and VWR reps at the university to sponsor the effort, so the club was able to purchase signs for the department’s labs aimed not just at keeping sashes down, but also saving water and turning off the lights when they’re not in use.

The sponsorship also allowed the team to buy prizes for a departmental conservation competition.

“We’re doing surprise inspections to decide who we think are the most energy-efficient research groups,” says Julia Pribyl, the club’s incoming president.

Given that there are 146 hoods in the Graduate Research Sciences Center alone, with potential yearly savings of $1,200 per hood, the students’ green efforts could make the department itself the biggest winner.