As a student enrolling in an experimental music class, you might have some vague hope that the course will expand your horizons and test your musical boundaries. Imagine the stakes, though, when it turns out that you’ll not only be listening to challenging sounds — like rice falling on various objects in a piece that stretches to 72 minutes — but actually performing such pieces yourself. Not only that, but performing them in New York City just one month into the semester as part of a world premiere that’s been written about in The New Yorker magazine. 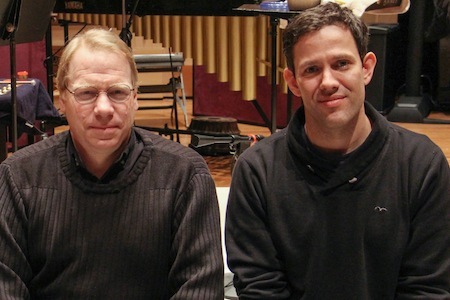 Composer Michael Pisaro (left) and Greg Stuart, assistant professor of music, have been collaborating for more than a decade.

This is exactly what 15 undergraduate Honors College students and five graduate-level music students are doing as part of the experimental music class taught by Greg Stuart, an experimental percussionist and assistant professor of music.

“Greg is artistically fearless, and I don’t think he knows that about himself,” says Ed Munn Sanchez, assistant dean of the Honors College. “I think he just thinks that’s what you do.”

The course has Honors College undergraduates working alongside members of Stuart’s Experimental Music Workshop to prepare for the live debut of composer Michael Pisaro’s “ricefall (2),” which they will perform along with instrumentalists from the world-renowned International Contemporary Ensemble at the Abrons Arts Center on Sept. 16. The score directs the students to make sounds with various objects at specific moments within the 72-minute piece; also present will be the composer, who will be generating sine tones from a laptop. The students will perform the full work in New York City; then, on five other tour stops — including one on Sept. 20 at 6 p.m. at the 701 Center for Contemporary Art in Columbia — they will perform an 18-minute excerpt. The concerts will also include another piece by Pisaro inspired by the American painter Agnes Martin.

“I love the example this gives our students for many reasons — including ones that have nothing to do with whether they are music students,” Sanchez says. “They see a level of commitment, a real passion for what you are doing, and a certain level of risk taking. Those are great things to learn in college.” 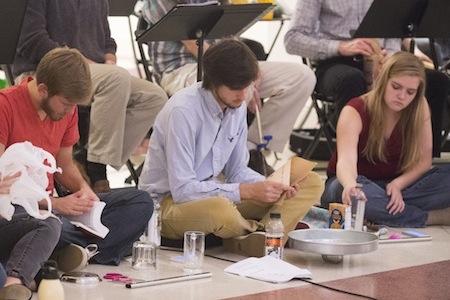 Stuart is uniquely positioned for this particular opportunity. He has had a long working relationship with Pisaro, having been involved in the premiere of “ricefall (1)” when he was a graduate student in San Diego more than a decade ago. He actually commissioned “ricefall (2)” as a graduate student and made a 64-musician recording of it in 2006, but the Sept. 16 concert will be its live debut. He also has a good friend in the International Contemporary Ensemble who helped facilitate the performance. After Stuart arranged the New York performance, Music School Dean Tayloe Harding got involved, too, turning a one-off concert into a full tour.

Though the idea of rice falling on objects being presented as music might seem esoteric, it can actually be a profound experience, altering the listener’s perception of both time and sound. Plus, “ricefall(2)” is underpinned by a very human story.

“The piece was inspired by John Hull’s book ‘Touching the Rock,’ in which he describes the process of losing his sight in middle age,” Stuart explains. “He talks in part about how listening becomes a critical sense in this process. Specifically, he talks about the sound of rain and how, for the nonsighted person, rain acts as a kind of light allowing one to ‘see’ where one is through sound. So, this piece attempts to create a rain-like landscape with rice.”

“I love the example this gives our students for many reasons ... they see a level of commitment, a real passion for what you are doing, and a certain level of risk taking. Those are great things to learn in college.”

Stuart’s course seeks to help students understand experimental music by performing it. It’s one thing to lecture about the importance of John Cage’s chance music and his nonstandard use of instruments; it’s another thing entirely to play it.

“I can, for instance, tell the students about John Cage’s ‘4’33” ’ and how it involves someone not playing their instrument, which is really counterintuitive,” Stuart says. “But if you put students in a situation where they have an actual opportunity to do it, that is something that can’t be communicated just by reading or lecturing. They start to have an awareness or understanding of it that really changes them … they just start hearing the sound of the world in a different way.”

The process of hearing differently takes time, but it’s a transition Stuart loves to see. “When a student shows up on Day One in an experimental music class in the Honors College, it’s like being introduced to a language that they basically have no reference point for,” Stuart says. “That can be challenging, but it’s also very exciting.”

Even for music students, the experience is ear-opening.

“I feel like I am learning something completely new,” Beck says. “I have to kind of relearn what I am supposed to do.”

Dean Harding is thrilled about how the course is going.

“Greg is uniquely skilled to deliver a certain kind of instruction in the Honors College — and in the Music School, too, for that matter,” Harding says. “It is working beyond my wildest dreams in terms of how successful I was hoping it would be.”

This semester’s trip comes after several years of a productive partnership between the Honors College and the School of Music. As much as the students have gotten out of the class every semester, Sanchez notes that this time is really something special.

“This is not normal,” he says. “We are not going to pull something like this off every year. This is possibly a once-in-20-year opportunity that they have stumbled into. It’s very exciting.”