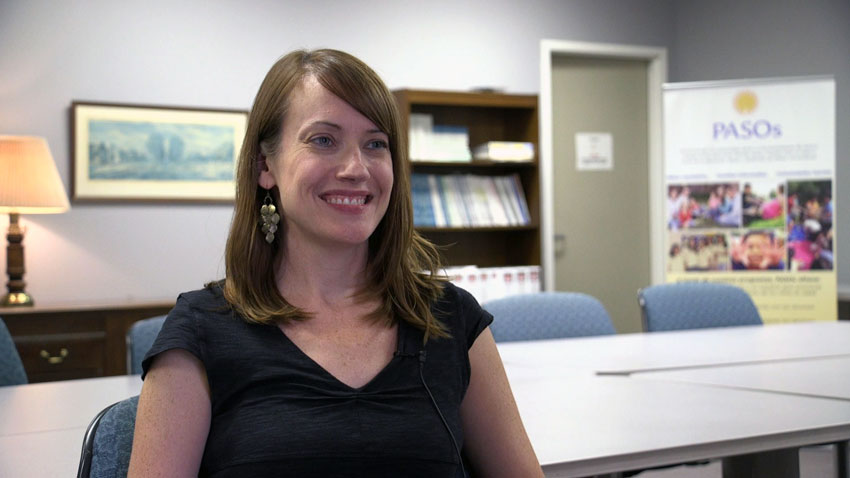 If you’re not Latino — or you don’t work in some capacity with South Carolina’s growing Latino population — you may never have heard of PASOs. But the organization, which provides culturally responsive health education, services and navigational guidance to roughly 8,500 Latinos a year in 29 of the Palmetto State’s 46 counties, makes a statewide impact that is both quantifiable and impossible to measure.

And while the PASOs model is predicated on reaching Latinos in the communities where they live, it’s only fitting that the organization itself is housed at the state’s flagship university — where it started 11 years ago as part of one student’s masters of social work field placement.

“We’ve developed something very grassroots that is guided by the needs of the affected community and the organizations involved,” says founder and director Julie Smithwick. “It’s not some model that was developed in New York and California that we’ve adapted to South Carolina. This is a homegrown South Carolina model responding to the needs of South Carolinians. That’s exciting.”

Originally shorthand for Perinatal Awareness for Successful Outcomes, PASOs has expanded its efforts beyond maternal and child health and made the decision in 2011 to abandon the acronym. So what is PASOs now — apart from being the Spanish word for “steps”? That depends on who you ask.

To a Latina mother-to-be who doesn’t speak English, it’s still a Latino-friendly link to available perinatal care resources. To a three-year-old or four-year-old, it’s early childhood education in preparation for kindergarten. To a clinician or hospital health care worker, it’s a bridge into an underserved community that’s sometimes reluctant to seek them out. To partner organizations and coalitions around the state, it’s a resource that’s helping them build more culturally appropriate services and resources.

To Smithwick, it’s also a philosophy — one rooted not only in her training at Carolina but in a four-and-half year stint she spent doing community-based work in Esmeraldas, Ecuador with the Peace Corps.

“I realized while I was in the Peace Corps that I have some ability to catalyze community work,” says the Florence, S.C. native, who also spent two years teaching English as a second language in rural North Carolina before returning to her home state for graduate school. “I learned to listen to people, I learned to understand the systems and the challenges that affect their ability to find the things that they need for their families to thrive. I learned to understand those factors, diagnose them and work with the community to find solutions.”

Step One: Identify the Problem

In 2005, Amy Holbert, a social worker in the Maternal Health Bureau’s Division of Perinatal Systems, asked Smithwick to use her second-year field placement doing needs assessment and gap analysis pertaining to Latino services.

Over the next several months, Smithwick conducted extensive interviews with stakeholders at every level, including public health professionals and clinicians as well as leaders in the Latino community who could speak to the specific health and education needs of their community. In her final report, Smithwick identified community assets and strengths that included a strong desire for healthy families. But she also identified language barriers, discrimination and a distrust of state agencies among non-English speaking immigrants.

That final report also attracted the attention of Carol Siegfried, director of Women’s and Neonatal Services at Palmetto Health Richland, who brought Smithwick on board part-time to begin addressing gaps in service. Initially, that simply meant offering culturally-appropriate classes relating to pregnancy and perinatal health, but it wasn’t long before the program began to expand — from the ground up.

“Just by sitting down with a group of women, speaking their language, respecting their culture, they began to trust me, and I started partnering with them to help resolve things,” says Smithwick. “Maybe it was a domestic violence situation, maybe a child wasn’t developing on the developmental scale as they should or a teenager was pregnant. I started connecting people to resources — ‘OK, for this you can go here,’ ‘For that you can go there.’”

Social work is seldom an easy road, but communication and trust are baked into the PASOs model, and so when word started to get back to Smithwick that many Latinos who were following up on PASOs referrals were still not receiving adequate services, she responded not by changing course but by broadening her approach. 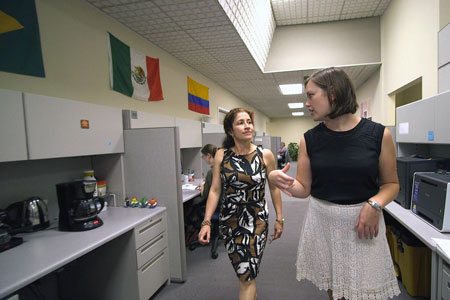 "I have been growing so much with PASOs all these years, it’s the best thing that I can do.” — Ana Cossio (left), native of Cuba and Midlands program coordinator for PASOs.

“We would direct someone to these resources, and they would often confront people who didn’t have the capacity to address their needs,” Smithwick says. “I realized, ‘Yes, I need to work with individuals, I need to do education, but I also need to address systemic issues because I can’t keep sending people to places that aren’t ready for them.’”

So she started partnering with organizations as well, helping them develop better systems and better plans that reflected the specific needs she was hearing in her conversations with the community.

“As I attended statewide coalition meetings, I began to try to bring forward the Latino point of view, what the women I interacted with were telling me about what their families were going through,” she says. “Also, I began debunking some myths around what the Latino community actually needed, and highlighting their individual and cultural strengths.”

As word of her success began to spread, health care leaders around the state began to approach her about expanding what was at that point, essentially, a one-woman operation. “They were coming to me saying, ‘We need this, too. We have a have huge Latino population, but they don’t trust us, they’re coming into care late, we need someone to help get them into prenatal care early.”

“So the ideas started to percolate,” she says, “and I started to ask myself, “OK, how can I expand this?’”

In 2008, with assistance from an advisory council member, Smithwick approached the Duke Endowment looking for funding, which in turn directed her back to the university, suggesting she partner with the South Carolina Public Health Institute (now the South Carolina Institute for Medicine and Public Health). After a conversation with then-director of SCPHI Donna Richter, PASOs teamed up with the institute, received a three-year grant and joined the Arnold School that same year.

The new funding enabled PASOs to expand to other parts of the state, beginning with Greenville. It also allowed Smithwick to hire her first employee in 2009.

She arranged meetings with different coalitions to talk about maternal and child health, and she reached out to representatives from local hospitals, clinics and DHEC. She also began to recruit Latino community leaders, or “promotores,” who used their individual and community strengths to spread the word about PASOs at health fairs and clinics, at flea market booths — at pretty much any access point they could find.

When we get to a new country, we know very little about how things work, and sometimes we think they work the same as in our own country. But it can be surprising how different they are, and if on top of that you don’t speak the language, everything can be source of stress and even depression.

Myriam Torres, epidemiolgist and director of the Consortium for Latino Immigration Studies

Eight years later, PASOs boasts 22 employees, including 19 fulltime and three part-time, who work both at the university and at sites around the state, plus another 50 volunteers. The PASOs offices are also a regular destination for student interns from public health, social work and the Spanish program.

“PASOs is providing impactful real-world training and service experiences for our undergraduates and various extramurally-funded research opportunities for graduate students,” says Thomas Chandler, dean of the Arnold School. “The PASOs budget is small — less than $60,000 per year from the Arnold School — but they are expert at fund raising and they have leveraged our support many times over in support of students and the community.”

PASOs also enjoys a close relationship with the Consortium for Latino Immigration Studies, run by epidemiologist Myriam Torres, herself one of the stakeholders Smithwick interviewed while conducting her initial research back in 2005.

When PASOs first joined the Arnold School of Public Health three years later, it was Torres who helped Smithwick find office space, but the longtime faculty member also became one of Smithwick’s principle campus partners. She now provides the organization with program evaluations and the research capacity to target its outreach and refine its approach.

“In many cases, we do the research together because they have the contact with the population directly,” says Torres. “We do great things together, PASOs and the Consortium. They do the programming, the navigation of systems, and together we do a lot of the cultural competence training in all parts of the state.”

For Torres, herself an immigrant from Colombia, PASOs also strikes a more personal note.

“When we get to a new country, we know very little about how things work, and sometimes we think they work the same as in our own country,” she says. “But it can be surprising how different they are, and if on top of that you don’t speak the language, everything can be source of stress and even depression.”

Factor in an average household income of approximately $20,000 a year among PASOs clientele, roughly 90 percent of whom also lack health insurance, and the obstacles can seem almost insurmountable.

“The fact that PASOs is out there responding to the community and looking for the people doing outreach work — to help people understand how to ask for an appointment, to help them see that in this country many things are done by phone, not in person — that’s very important,” says Torres.

Step Five: Pass It On

Examples of PASOs’ impact can be found in Latino communities across the state, but they can also be found in the PASOs office, among the PASOs staff. Take, for example, Midlands Program Coordinator Ana Cossio.

A onetime biology teacher in her native Cuba, Cossio brought her family to the U.S. in 2004 per an agreement between the two countries that allows a limited number of Cubans to immigrate to the U.S. legally each year. Cossio had an elderly aunt and uncle in Columbia, but otherwise had zero connections in their new country, no transportation and such limited finances that at one point she took a job cleaning hotels for $11.95 per hour.

Like many new immigrants, she also spoke very little English.

“I was all the time thinking, ‘I need to learn English,’” says Cossio. “The most important reason for me was my son. How you can understand the teachers? How you can communicate with them if there is an issue with your child? How you can go to the doctor and explain the symptoms that your child has? It was difficult.”

In time, Cossio did learn English — in fact, she learned it well enough that she landed a job with one of PASOs’ maternal health partner programs, which in turn led to her current position at PASOs — but recalling her own inability to speak the language when she first arrived is now one of her biggest motivations.

It’s also one of the reasons Cossio enrolled this semester in the university’s MSW program —  the same program that Smithwick went through, the same one that helped give birth to PASOs more than a decade ago.

“I have been growing so much with PASOs all these years, it’s the best thing that I can do,” says Cossio. “Julie has been supporting me and all the staff for many years. She knows — even when she’s American, she knows what are the situations with the Latino community, what we need to have a better life, to improve the wellbeing of the Latino community. So, I mean, I can’t explain — I have not enough words to say how wonderful I feel to be part of this organization.”