Scott O’Dell’s 1960 book “Island of the Blue Dolphins” has been a classroom favorite, despite some potentially controversial elements.

The University of South Carolina’s Sara Schwebel, associate professor of English in the College of Arts and Sciences, is working to help explain that controversy. She has edited and published a critical edition of the book, complete with an introduction and essays to help place the narrative in its correct historical and cultural context.

“Island of the Blue Dolphins” tells the story of a young Native American woman left alone on an island off the California coast after white men took her people to the mainland. The book, common on elementary school reading lists, follows her survival story as she lives on her own for almost 20 years. 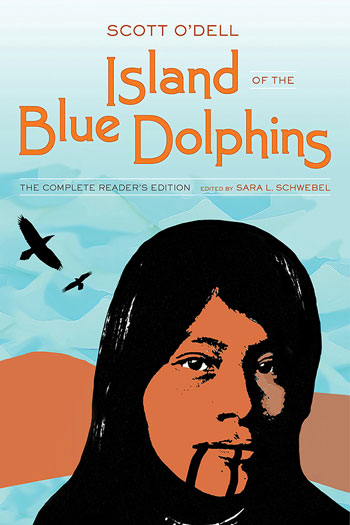 Associate English professor Sara Schwebel, with the help of students, has edited and published a critical edition of 1960 Newbery winner, "Island of the Blue Dolphins."

Schwebel’s edition is a reprint of the first edition — this time with footnotes, an introduction and analytical essays. Schwebel’s footnotes include links from the novel to the story of the Lone Woman, the real-life Nicoleño woman who lived alone on San Nicolas Island for 18 years, including what researchers have learned about her through historical and archaeological work. Her introduction describes the research O’Dell did when writing this book, as well as his editing process and an analysis of the movie adaptation of the novel, made in the 1970s. Two previously cut chapters are also included, as well as essays by an archaeologist and a legal scholar. These additions are designed to make it easier for upper elementary through high school educators to teach this book.

“The solution is to teach the book critically and help all students in the classroom see why certain representations can be harmful,” says Schwebel, adding that she wants to help raise awareness about why the book can be considered problematic by adding context and analysis to the storyline.

“The book was broadly embraced because it was perceived as advocating for gender equality and being 'historically accurate,’ ” Schwebel says. “It also presents a strong environmental message about not killing animals at will. But what most readers missed is the problematic way the book represents native peoples. The native protagonist is presented positively, as a 'noble savage,' but positive stereotypes are still stereotypes. And at the end of the novel, all of the people of San Nicolas Island have disappeared. ‘Island of the Blue Dolphins’ is a vanishing Indian story."

Her project with this book, though, extends beyond the new, critical edition of the text. “Island of the Blue Dolphins” is an adaptation of the story of “The Lone Woman of San Nicolas Island.” Schwebel has been working with a group of Carolina students for more than three years researching the Lone Woman, a story that spread from California to Boston, back across the country and over to Hawaii and beyond nearly 150 years ago.

“We have been tracking circulation of this story that went around the world for more than 100 years before ‘Island of the Blue Dolphins’ was published,” Schwebel says.

Part of Schwebel’s research has included searching for and acquiring stories and documents about the Lone Woman – a task that has heavily involved her students. The story of the Lone Woman was first published as an article in the Boston Atlas in 1847, Schwebel says. That first article was directly reprinted at least 12 times, including in Hawaii. The original article and its reprints make up one document group. Schwebel and her students have so far found 35 separate document groups.

These document groups are featured on the new digital archive and multimedia website Schwebel and her students built in conjunction with Channel Islands National Park. This website includes images of the original published articles, as well as transcriptions annotated to provide readers with context and to restore the names and identities of native people, which were often left out of the original reporting, Schwebel says.

“I spent a lot of time finding and getting clear digital copies, as well as transcribing the articles,” Caroline Blount, fourth-year English and German major, says. “I used the interlibrary loan to get microfilms. You get a taste for the whole 19th century newspaper that way.”

The interpretive function on the website allows users to select various literary tropes so users can read the text with an analytical eye, especially in terms of politics. The annotations help “explain the narrative in much the same way readers at the time might have understood it,” Schwebel says. A time-lapse map on the website shows the geographic spread of the Lone Woman’s story over time.

“Digital collections are important because they make texts available for more robust study,” says Rachel Manuszak, a graduate student in the School of Library and Information Sciences who has been working on this project for more than three years.

Manuszak, Blount and Schwebel’s other student researchers used archival documents, print resources and digital collections to create the website to aims make the study of Scott O’Dell’s “Island of the Blue Dolphins” more accurate and provide context for more accurate understanding of the story of the Lone Woman. Between the analytical edition of the book and the archival website, readers have an expanse of materials to help explain the controversial aspects of the novel.

“Through its interpretive mode, the archive helps readers to see things they might otherwise miss. They can select a literary trope and highlighted text will appear in a document transcription, showing where a trope is at play in the article,” Schwebel says. “The critical edition reprints the novel with footnotes and shows readers links to the actual story of the Lone Woman.”