For Michael Dowdy, there’s a familiar ring to this year’s political rhetoric about border walls and deportation of Latinos. 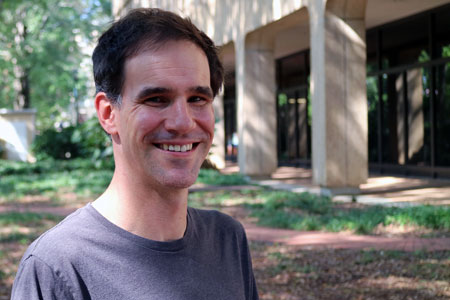 “You can humanize a population that is invisible, or visible for the wrong reasons, by teaching literature that includes their voices. Latino writers can provide historical perspective that is otherwise lacking.” — Michael Dowdy, professor in English and literature

“The debates we’re having now, even the intensity of the rhetoric, is not new for Latinos,” says Dowdy, a recently appointed associate professor in English and literature whose specialty is Latino literature and poetry. “Latinos have a different story than most in coming to the United States and a unique perspective on the American dream.”

Dowdy, who taught in New York City for the past 10 years before arriving at Carolina, became interested in Latino literature and poetry while in graduate school. He was drawn to the issues many of those Latino writers grappled with, including the political and social struggles of immigrants to the United States.

That diversity of Latino voices is personified by the current U.S. poet laureate, Juan Felipe Herrera, who grew up in California as the son of migrant farm workers. His work has been very critical of U.S. imperialism in Latin America, Dowdy says, and can be both engaging and complex for students.

Because Latino writers provide a distinct historical perspective, Latin American literature is an important part of the canon for teaching, Dowdy says. “My primary goal is to introduce students to writers and text they wouldn’t otherwise encounter, writers who might expand their horizons and pique their interests.”

Latino literature also illuminates events in American history that have been overlooked or forgotten in history books. One such episode is known as the Decade of Betrayal and involved the deportation of more than one million Latinos during the Depression in the 1930s. Nearly two-thirds of those deported were American citizens. “The Depression prompted it,” Dowdy says. “There was a feeling then of ‘They’re taking our jobs and our public benefits,’ a refrain that sounds familiar.

“You can humanize a population that is invisible or visible for the wrong reasons by teaching literature that includes their voices. Latino writers can provide historical perspective that is otherwise lacking.”