Portnoy conducts a night of scores from movie blockbusters

To some, a night at the symphony sounds like a highbrow affair with ladies and gentlemen dressed to the nines clapping politely to music written hundreds of years ago. USC Symphony Orchestra director Donald Portnoy says that doesn’t have to be the case.

“A lot of the general public says, ‘I don’t know much about orchestras,' but they don’t realize they hear orchestras every single day,” says Portnoy. “Every time they put the TV on or watch a movie, it’s a symphony orchestra that’s accompanying it.”

Music is as much a part of the movie-watching experience as the cinematography or the dialogue. “They are tied in, when they get happy, when they get sad, it’s all because of the change in the music,” says Portnoy. So when one listens to an ostinato of bass notes composed by John Williams, one feels afraid — afraid of going into the water.

That shark theme from the 1975 movie “Jaws” is one of Williams’ five Academy Award-winning compositions and will be featured when the USC Symphony Orchestra presents, “John Williams’ Blockbusters!” The concert set for Tuesday (Oct. 18) also will include music from “Catch Me If You Can” featuring saxophone professor Clifford Leaman, “Saving Private Ryan,” “Raiders of the Lost Ark,” “Harry Potter and the Chamber of Secrets,” “Memoirs of a Geisha: The Chairman’s Waltz,” and “Star Wars: The Force Awakens.” 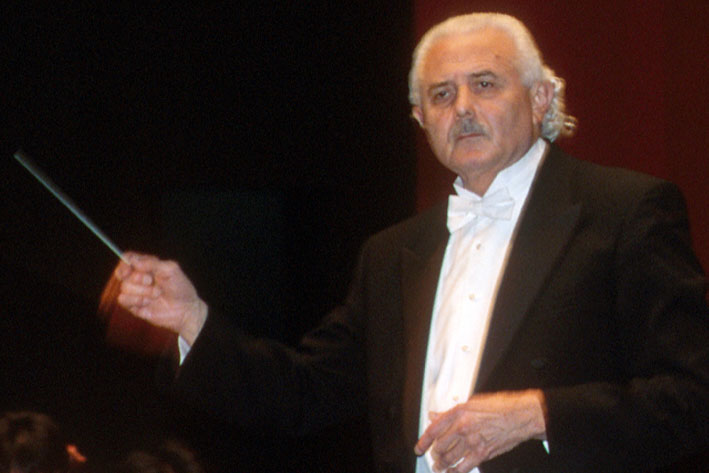 “I try to find a repertoire that will be interesting and challenging to my players,” says Portnoy. “And also create variety, things an audience would enjoy.”

Portnoy, who is retiring at the end of the academic year after leading the symphony for 31 years, holds the Ira McKissick Koger Endowed Chair for the Fine Arts. While at Carolina, he founded the renowned Conductors Institute, whose participants come from all parts of the U.S. and abroad to attend annual summer sessions in Columbia, at the Spoleto Festival in Charleston and in Argentina.

“Being a conductor, you’re looking at the score, deciding how it should be to interpret what the composer has put on the page using your own ideas,” Portnoy says. “It’s getting up there and by the use of gestures of your hand and your face and your body, you’re getting these ideas across to musicians so they produce what you have in mind.”

Portnoy's dedication to the craft of conducting is paying off for the next generation of conductors. "Many conducting teachers focus mainly on 'baton technique,'" says masters student J. Aaron Hardwick, who is the director of Columbia College's chamber orchestra. "Dr. Portnoy dedicates time to his students to inspire them to be a complete conductor."

Portnoy is proud of how the orchestra program has grown during his tenure at USC.

“I don’t know of any other schools that have a program like this, with a season of six or seven concerts, plus a chamber orchestra of two concerts. The students have a chance to rub elbows with world-class artists, and every artist that comes in does a master class for students,” says Portnoy.

The “John Williams’ Blockbusters!” concert is at 7:30 p.m. Tuesday at the Koger Center of the Arts. A pre-concert Prelude Talk with Portnoy takes place at 6:45 p.m. in the large rehearsal room at the Koger. The audience may include a Princess Leia, Indiana Jones or a few Harry Potters. Concert-goers are encouraged to dress as their favorite film hero with prizes for the best costumes.