University poised to lead in transformation of libraries, information science

David Lankes went to college to become an illustrator; he ended up working on websites in the early days of the internet instead. Now director of the School of Library and Information Science and associate dean in the College of Information and Communications, Lankes has been at the forefront of his field ever since.

“What I love about the field of library and information science is the impact of what we do, the lives that we make better,” Lankes says. 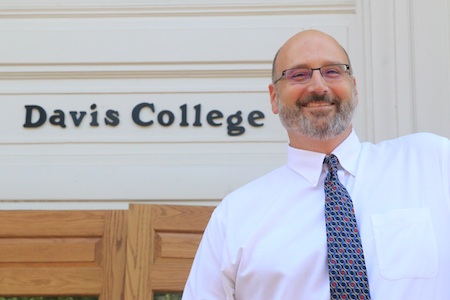 David Lankes is excited about the energy and opportunity at the university's School of Library and Information Science. “Part of the reason I came down here is to be part of a team that truly wants to set an agenda and not simply sit back and see where we are going to be tomorrow,” he says.

Lankes laughs as he tells the story of how he moved from illustration to information. While an undergraduate at Syracuse University, a professor told his class, “‘Some day, you’ll be able to rip off someone’s style so well that you can get your first commission, quit your job at the mall and move out from your parents’ house.’” That was all the dissuasion Lankes needed; he pivoted into a special studies art major that allowed him to move to tech-world design and the study of library and information science.

“This was in the late ‘80s, early ‘90s; at the time, computers and technology were coming onto campus,” he says. “I had worked a lot in technology, and so my degree really was, ironically, in virtual reality and multimedia — way ahead of the curve. Then it died; now, it’s back again.”

Lankes went on to pursue a master’s in telecommunications and a doctorate in information transfer, also at Syracuse University. His early interest in the internet made him a valuable asset; his first project as a doctoral student was helping his adviser create an online reference service for teachers.

Eventually, Lankes joined the Syracuse faculty. Altogether, he spent 28 years there. He’s proud of his time at a school that was an early leader in the field, but he’s ready to write the next chapter at the University of South Carolina.

“We have outstanding faculty that are committed to education and are really ready to take on a national and international stage in the research they do,” Lankes says.

Between the exponential growth of data and the ever-increasing importance of the internet, Lankes sees a changing landscape ahead.

“My research over the past couple of years has been specifically looking at libraries and how libraries are refocusing from the collections and materials and the buildings to the communities — what communities want to get done, their dreams and aspirations,” he says. “The specific area I am looking at is how libraries structure themselves around learning and communities. My larger goal is looking at how we build information systems to take advantage of people’s smarts.”

“The reason we have libraries today is not because over 4,000 years they didn’t change — it’s because they changed pretty dramatically in response to the times. We are at that inflection point now.”

David Lankes, director of the School of Library and Information Science

Lankes wants to make sure that as the ways in which information is accessed evolves, people’s needs are always at the forefront.

“One of the things that is an important hallmark to library and information science as a field is that it’s about improving society — it has a social obligation to it,” he says. “Our graduates go and work at Fortune 500 companies and at rural schools that don’t have enough money for textbooks. They work on computing and data analytics and they work on children’s reading. They are both looking at how to improve society and using information to do it‚ just in different parts of the society. So, that team — how we build it and how we develop it — that’s exciting.”

As the field of information science evolves, Lankes is eager for the University of South Carolina to help lead that transformation.

“The reason we have libraries today is not because over 4,000 years they didn’t change — it’s because they changed pretty dramatically in response to the times. We are at that inflection point now,” he says. “Part of the reason I came down here is to be part of a team that truly wants to set an agenda and not simply sit back and see where we are going to be tomorrow. My goal is not to think small but to think big — and to really produce the world’s best librarians and the world’s best information scientists, and the next generation of faculty to train them.”