Putting on a clinic 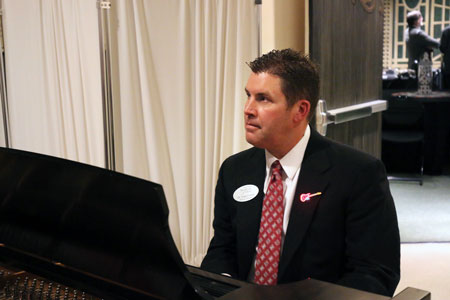 Todd Crump started volunteering at Columbia’s Free Medical Clinic while he was still a student at the University of South Carolina School of Medicine. Eighteen years later, he’s the clinic’s medical director.

“I saw what an incredible need there is in the community,” says Crump, who is also assistant director of the Emergency Department at Lexington Medical Center. “I went into medicine to help people, and how better to offer that help than at a free clinic?”

But the gig as the clinic’s medical director entails more than seeing patients or performing administrative duties. Crump is also the free clinic’s unofficial concert promoter, the man behind the annual Doctors Lounge fundraiser concert, which raises thousands of dollars for the clinic every year and only gets bigger.

“It’s kind of mushroomed over the last twelve years,” says Crump,’92 M.Ed., ’98 M.D. “When we first started it was a small event with under a hundred people. Its’s just grown and grown, and we’re of course very grateful for that.”

In 2015, the event attracted approximately 600 people and netted close to $50,000. Organizers are still calculating the figures for the 2016 event, which was held at the Columbia Museum of Art Nov. 10, but according to Crump, it was another success — especially when you consider how far each dollar goes toward helping those in need.

“We can really stretch a dollar,” says Crump. “For every dollar that we receive, whether it’s through a donation or a fundraiser, we generate about $7.52 worth of health care. So this is obviously a huge event that enables us to provide services for a lot of people.”

And that’s critical, as Crump explains, because so many people in the Midlands lack health care coverage.

“We’re there to serve those individuals.” 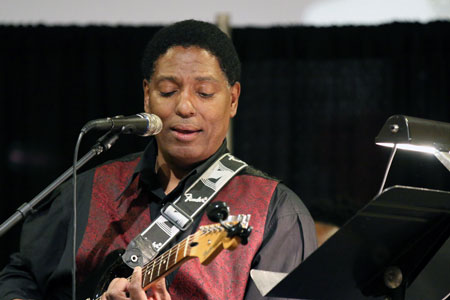 Psychiatrist Timothy Malone, ’93 M.D., jazzes things up at the Columbia Museum of Art.

The annual November fundraiser is also a lot of fun, of course — particularly for the musicians, who get to explore a different passion and show off a different talent.

Take Timothy Malone, ’93 M.D. A psychiatrist at Palmetto Health and Three Rivers Behavioral Health and wellness director for the University of South Carolina athletics department, Malone has been strumming his six-string and blowing the alto sax since he was a teenager in Summerville, S.C.

Back then, it was Navy dances and TV jingles for local businesses, usually alongside his big brother. Nowadays, it’s jazz combos with local saxophonist Skipp Pearson, the occasional solo gig and, of course, the Doctors Lounge, which he’s been a part of since day one.

“It’s sort of like back when I was playing for the sailors,” says Malone, who once flirted with a full-time career in music. “I treat a lot of patients in this town, and many of them have utilized the services of the free clinic over the years, so it’s a way of giving back. Don’t get me wrong, I’m a ham, I love to perform, but the cause just couldn’t be greater.”

And rocking out for a good cause has fringe benefits, according to musician-physicians like Brooks Mays. An endocrinologist at Pinehurst Medical Center in Pinehurst, N.C., Mays couldn’t make it to this year’s event, but the USC School of Medicine alumnus credits the event for getting him back into music.

“If it weren’t for Doctors Lounge, I probably wouldn’t have picked up my guitar for years,” says Mays, ’95 master’s, ’02 M.D. “That really rekindled things. I hadn’t lost my love for music, but between grad school, medical school and everything else, I had lost the time.”

Now, despite the busy workweek, Mays finds time. He recently built a small “rock room” in his basement for his growing guitar collection and outfitted it with amps and recording equipment. Then, after teaching himself mandolin, a musician friend in Washington, D.C., invited him to play on an upcoming album.

“Medicine is fascinating, but it can also be incredibly stressful,” he says. “Music is an outlet. I can play for an hour or two and not even realize it because I’m in the zone. It’s like having a great workout. The endorphins are flowing. It takes you away.”

And on the keys …

Doctors Lounge is rewarding for Crump, too, but in a different way. As the man behind the music, he typically stays off stage — despite being a practiced pianist.

“I’ve filled in between acts when there is dead space, but I’m so busy as the producer of the event that I really don’t have time to perform,” he says with a laugh. “I never put myself down on the poster as one of the performers, but I can play the piano a bit, mostly country and gospel. I wish I could play more but I’ve just gotten too busy.”

Indeed, Crump is already planning Doctors Lounge 2017, which means reviewing this year’s event to see what can be improved and seeking out more doctors who rock.

“We always like to keep things fresh,” he says. “I run into people all the time that say, ‘Hey, you’re the guy that puts on that fundraiser. Have you talked to so-and-so? He’s my physician and he plays guitar.’”

And it’s not just the local medical community that’s noticed.

“It’s funny — talking to other nonprofits around the country, they all tell us, ‘This is one of the most unique things we’ve ever come across,’” says Crump. “And it’s a lot of fun. It’s a lot of work — they have to rehearse — but most of the doctors who perform really enjoy it.”