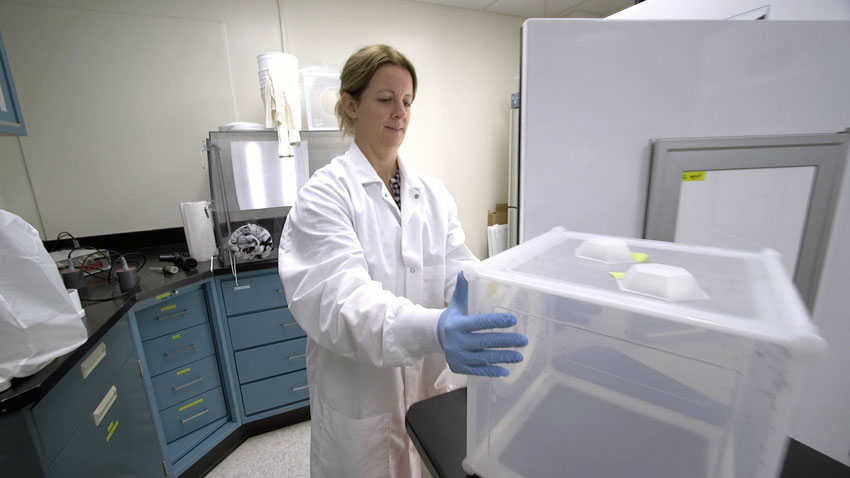 Tonya Colpitts’ profession is a real conversation-starter — or ender. Colpitts, a molecular virologist and assistant professor in the School of Medicine, spends her days surrounded by mosquitoes.

“I’ll go to the neighborhood block party and say, ‘Well, here’s what I do,’ ” she says. “I start with ‘I’m a professor. I also do research in viruses.’ If anybody’s interested further, I’ll talk.”

Save for the large stuffed mosquito crawling up her window blinds, the critters Colpitts studies are confined to cages in the pathology, microbiology and immunology department lab where she’s made strides in combating dengue, a virus which can lead to hemorrhagic fever and is especially dangerous for children and the elderly.

There is no vaccine or specific treatment for dengue, and initial exposure causes humans to produce antibodies that make it harder to fight off subsequent infections. So Colpitts concentrates on the source: the mosquito.

Having identified several proteins necessary for virus survival or infection, Colpitts and colleagues pinpointed a direct correlation between one — called CRVP379 — in the mosquito gut and the animal’s level of infection. They created antibodies to bind the protein, preventing infection from occurring after the mosquito slurps dengue-tainted blood. 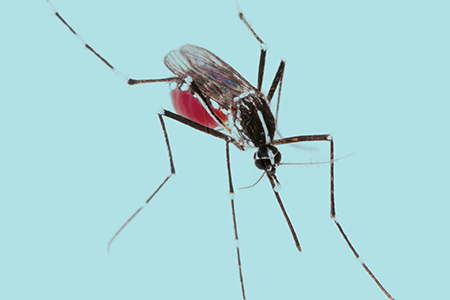 Tonya Colpitts concentrates on the source of the dengue virus: the mosquito.

Colpitts pursued a long-held fascination with viruses while earning her doctoral degree at the University of Texas and became further intrigued by mosquito-borne mysteries during postdoctoral work at Yale.

ScienceDaily.com estimates that 2 billion people are at risk for dengue infection, mainly in tropical and subtropical regions in Asia, the Americas, Africa and Pacific and Mediterranean regions. Most U.S. cases occur in travelers to those areas, but recent outbreaks in Texas and Florida involved local transmission.

While the U.S. population is largely protected by widespread use of air conditioning and window screens, “it could spike here,” Colpitts says. “We have the mosquito that spreads it.”

“The virus can’t be controlled by controlling human behavior. Controlling mosquitoes is much more daunting.”

Blood mixed with dengue virus goes into membrane feeders heated to body temperature. Mosquitoes then dine on their specially prepared meal and are examined under a protective hood.

The blood comes from expired blood center stock and skin used in similar studies from the Cooperative Human Tissue Network.

In her lab, Colpitts says, when a refrigerator has a “No Food or Drink” sign, “you really, really want to pay attention.”

Questions about the viability of a mosquito-based, transmission-blocking vaccine remain. It’s unclear how long the antibodies last in mosquitoes, and people receiving a vaccine would have to be sold on a shot that doesn’t protect them from disease but instead causes them to manufacture antibodies for the pests.