Dance Marathon’s main event is the culmination of a yearlong fundraising effort. Students arrive at 10 a.m. ready to dance, raise money and listen to stories from families who have been served by Palmetto Health Children’s Hospital in Columbia. The event ends at midnight when donations close, and the grand total is revealed. 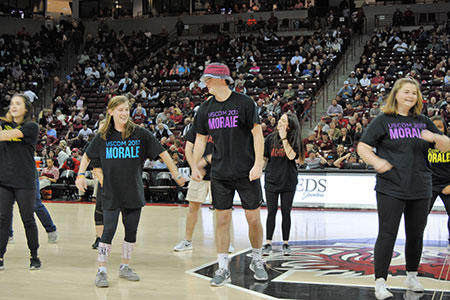 Seeing the energy at Dance Marathon is what hooked Jo Jo Winkleman, who participated with her sorority, Gamma Phi Beta, her freshman year. The senior advertising major from St. Louis is now the alumni relations director for the organization. The experience of Dance Marathon combined with having seen her role models participate led her to get involved.

“A lot of college is about us and about bettering ourselves,” Winklemann says. “This is one of those few things that are 100 percent about someone else and about something bigger, and I love that.”

Dance Marathon has been on campus since 1999, having raised more than $2.9 million for Palmetto Health Children’s Hospital. Dance Marathon is Carolina’s largest student-run philanthropic organization. This year’s goal, $700,000, is its highest fundraising goal to date.

“We chose $700,000 as our goal because we wanted to push way past what we raised last year,” Winklemann says. “We were kind of playing on the ‘No Limits’ campaign the university has, saying that the good we can do with Dance Marathon is limitless.”

“There was a little boy who was so excited to find a Captain America costume, but he kept falling over. No matter how many times he fell he would jump right back up, IV pole still in hand and he would laugh it off,” Boucher says. “His mom leaned over and told me he kept falling because it was his first time out of bed in a week. He was so excited to go trick-or-treating and to dress up. He was determined to get out of bed.”

This year, Dance Marathon started a program to get freshman and sophomores more involved as leaders within the organization. The members act as a part of staff, working to get their friends involved, making posters, painting cans for collecting donations and recruiting student participants on campus.

Winklemann says in addition to attending a few meetings during the fall, the students get to shadow Dance Marathon committee members as a way of joining the committee with a smaller obligation. 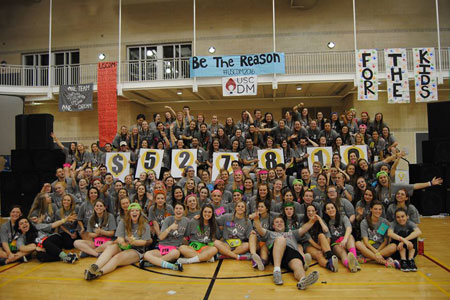 Dance Marathon, the largest student-led philanthropy at Carolina, ranks No. 13 among collegiate Dance Marathon chapters for funds raised. In 2016, USCDM raised $527,810 for Palmetto Health Children's Hospital. This year's goal is $700,000.

While Dance Marathon students would love to break into the top 10 among collegiate programs for funds raised, they remain focused on their mission as funder of Palmetto Health Children’s Hospital’s Child Life program, which focuses on making the hospital an inviting place for children and their families.

“Child Life offers a comprehensive psychosocial program that helps children and families cope with the stress of hospitalization through play, preparation/support, education and self-expression,” says Priscilla Young, events director for the Children’s Hospital. “Without funds from community partners like USC Dance Marathon, programs like this wouldn’t exist at the hospital. We continually are inspired by the USC Dance Marathon students and are so grateful for all of their hard work.”

Founded in 1983, Palmetto Health Children’s Hospital is South Carolina’s first pediatric hospital. More than 150,000 children are served by the hospital each year.

Dance Marathon was started in 1991 at Indiana University in memory of a student who died of HIV/AIDS. Since then, the student-led organization has spread with more than 300 participating high schools and universities across North America. Since its inception, Dance Marathon has raised more than $150 million for Children’s Miracle Network Hospitals. Unlike many national philanthropies, monies raised by individual colleges benefit local pediatric hospitals.