There’s no better place in Columbia to enjoy spring than the University of South Carolina and its iconic Horseshoe. Its vibrancy is evident in the exploding color of pink azaleas and yellow daffodils, the melodic sounds of guitar and violin and the array of activities that take place — from reading to Frisbee throwing. 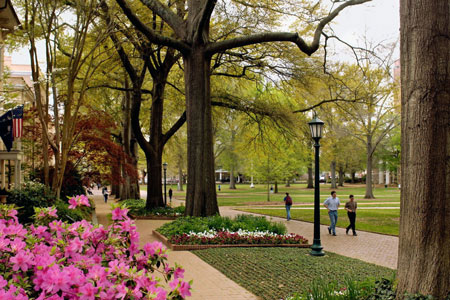 My Carolina will usher in spring with a pair of campus events.

To officially usher in spring, My Carolina Alumni Association is hosting two public events: A historic Horseshoe tour and reception with University Archivist Elizabeth West on Thursday (March 9) and an evening of Southern heirloom foods and culture with Carolina Distinguished Professor David Shields on March 16.

“My Carolina is excited to showcase our outstanding faculty, staff and alumni through our new speaker’s series. The response to our two spring events has been great, and we are looking forward to bringing more engagement opportunities like this to campus, our alumni and the community,” says Jack Claypoole, executive director of My Carolina Alumni Association.

Reserve your spot for both events online.

Hosted by My Carolina’s Club of Richland and Lexington Counties, the Horseshoe tour event run from 5:30 to 7:30 p.m. West will detail the history of the Horseshoe, the university’s original campus that comprises 11 buildings, 10 of which are listed on the National Register of Historic Places, and share stories from Carolina’s past. West will draw from her book, “On the Horseshoe: A Guide to the Historic Campus of the University of South Carolina,” which she co-wrote with Katharine Thompson Allen and was published by USC Press in late 2015. The event will include a reception featuring appetizers, wine, beer, water and iced-tea.

“While the Horseshoe history tours provide information on the familiar buildings of the Horseshoe, they also include tales of significant events that occurred on and around campus, as well as the stories of the people who have lived, worked and studied here,” West says. “We cover events that range from the school’s opening to the admission of women to the use of the campus as a hospital during the Civil War.

“Student life provides some of the liveliest stories on the tour, including pranks like turkey stealing and disturbances like the 1902 Carolina-Clemson Riot and the Great Biscuit Rebellion. Attendees learn why a glass tax was imposed upon students in the 19th century, why the university was desegregated twice, why there’s a wall around the campus, and what national record students set in 1974.”

Tickets are $15 for My Carolina life members, $20 for annual and three-year members and $25 for nonmembers. Registration is required.

Carolina Distinguished Professor David Shields, an authority on the history and culture of Southern foods, will take guests on culinary journey from 6 to 8 p.m. in the Alumni Center, which is located at Senate and Lincoln streets. In addition to Shields’ talk, participants will enjoy hors d’oeuvres and sample heirloom foods. Tickets are $15 per person.

Shields, chairman of the Carolina Gold Rice Foundation, has been instrumental in the recovery and restoration of many key ingredients to Southern cooking, including Carolina Gold rice, benne, purple ribbon sugarcane, purple straw wheat, seashore black rye, sea island white flint corn, the rice pea and the Carolina African runner peanut. His latest book, titled “Southern Provisions: The Creation and Revival of a Cuisine,” was published in 2015 and details the rich history of Southern foods past and present.

Shields says concerns today about disease resistance and the ability to ship fruits and vegetables has nudged taste from being the primary attribute sought as was the case in generations past.

“Heirloom foods are foods that predate 50 years, but there is another term that I use — landrace. A landrace was a vegetable that was improved by farmers over hundreds of growing generations and as many as 30–40 human generations through seed selection,” Shields said. “One of the things that it was selected for was taste. The Carolina Gold Rice Foundation and I have been concerned with is the restoration of those plants, which are enduring icons of taste in our region.”