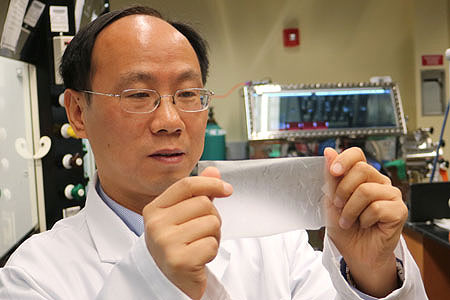 Chemistry professor Chuanbing Tang holds a piece of the plastic film made in his lab with soybean oil instead of fossil fuel.

Soybeans, used to make margarine, milk and tofu, among other things, might be tapped for yet another purpose — plastics.

University of South Carolina chemistry professor Chuanbing Tang is using the versatile soybean as the primary ingredient in plastic film and molded plastic. He has a patent pending for a chemical formula to convert soybean oil into “green” plastic.

“Industrial production of plastic uses 7 percent of available fossils fuels, but soybeans are renewable. Soybean oil-derived plastic would be a sustainable product without compromising the food industry,” says Tang, who recently received a Presidential Early Career Award for Scientists and Engineers from the federal government.

Tang has been working on formulas and processes to convert biomass such as pine tree sap into renewable products. He has been awarded a few patents related to that field and has also launched a start-up company, SUSMER. SUSMER is focused on derivatives of plant oils, including fatty alcohol, for industries making surfactants, detergents, personal care and cosmetics products. The company name is shorthand for ‘sustainable monomers and polymers.’

Tang believes his patent-pending formula for making chemicals and plastic from soybean oil will find traction in industry because it’s an economical process that doesn’t require hydrogen or high pressure like some production in industry. The process is also efficient with no carbon waste.

One of the plastic films Tang has made from soybean oil has a mild adhesive quality, making it suitable for packing around electronics and similar goods. Soybean oil could also be used to make insulation for electronics, he says.

Tang’s next goal is to develop soybean oil-based paints, which, like plastics, would be greener than fossil fuel-based paints.

“We did a market survey with more than 100 potential customers, and people said if the performance is there along with low cost, they’d be interested in switching,” Tang says. He added that ‘soy paint’ would not only be comparable in cost to fossil fuel-based paints but would also have better durability and adhesion.