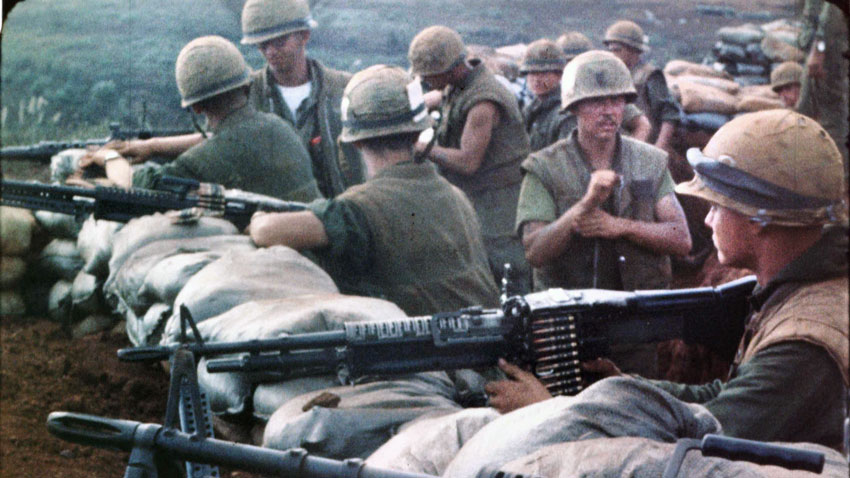 Curators at the University of South Carolina Libraries are beginning to preserve and store more than 75 years of United States Marine Corps history with the opening of a new digital scanning center and cold-storage vault.

Longtime university libraries supporter Richard and Novelle Smith funded the film vault and scanning center, which were named to honor the legacy of Novelle's cousins, James and John Davis, Carolina alumni who served their country with distinction.

Jim Davis joined the Marines in 1967, served two tours of Vietnam and was awarded three Purple Hearts and two Bronze Stars. After retiring, he worked with the Dorchester County Sheriff's Department, spearheading its counter-narcotics initiative. He led the emergency response team during and after Hurricane Hugo. Davis joined the Central Intelligence Agency in 1990 and served two tours in Iraq and Afghanistan in support of Operation Iraqi Freedom. His last assignment was as an instructor at the Marine Corps Command and Staff College.

His brother, John Davis, graduated from Carolina in 1971 and served seven years in the Marine Corps Reserves as a member of its explosive ordnance disposal team. After his military service, he worked as associate director of the Columbia Museum of Art and then at the College of Charleston, where he was the arborist and director of grounds before retiring.

The addition of the vault and scanner is the first step in saving 1,800 hours of 16mm and 35mm film shot by Marine Corps photographers starting in the late 1930s. The collection includes combat footage from World War II, the Korean War and the Vietnam War as well as footage of training, testing and public relations activities up to the 1970s.

In 2015 the History Division at Marine Corps University approached MIRC to preserve, digitize and share the film collection that had been stored at Quantico for decades. MIRC, one of the largest and most respected academic film and video archives in the country, has holdings of rare and historically relevant film that are used by well-known documentary filmmakers, historians and scholars worldwide.

"We are doing this because we want to extend our expertise to the Marine Corps as our way of saying thank you for all the Marines do for every American, every day," McNally says. "We never had a doubt that there were would be individuals and groups who would support what we are trying to do."

Building on the Smiths’ lead gift, MIRC is raising an additional $2 million needed to preserve the entire Marine Corps library. Budget items include enhancing the software technology required to transfer the images from film canisters to digital computer files. Plans also call for the hiring of additional staff who review, interpret and catalog the vast collection – an effort that will take years to complete.

A kickoff campaign last fall raised $25,000, which was designated to save and share 63 films shot in 1961 at the Parris Island Marine Corps Recruit Depot in Beaufort, South Carolina.

MIRC ultimately will develop a freely accessible, online digital film library that students, researchers, historians, veterans and their families can watch and add insight and information to enrich the repository of Marine Corps history.

"We will keep moving forward until every reel of film has been digitized and is on the web, available free for every American, every Marine and every family member of every Marine," McNally says.

To learn more about the collection and how to contribute to the project, visit the University Libraries website.