Remembering D-Day through film and stories 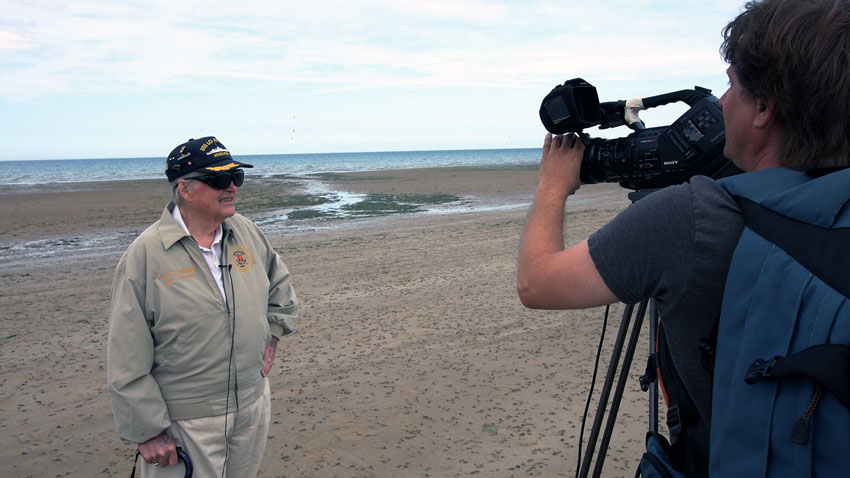 D-Day will be marked in early June with parades and commemorations along the beaches in northern France where more than 160,000 Allied troops landed 73 years ago in an invasion that would lead to the defeat of Nazi Germany in Europe.

University of South Carolina alumnus Wade Sellers will be there, too, on the independent filmmaker’s third trip to the French coast. This time, he’ll be screening the film he directed and edited, “Return to Normandy,” in the primetime slot at the Normandy-World War II International Film Festival.

His documentary, which will air nationally on PBS on Memorial Day, follows a group of U.S. servicemen as they returned for the 70th anniversary of the June 6, 1944, invasion. Sellers returned for the 72nd anniversary to continue work on the film, which tells the stories of the men who fought and captures the affection felt by today’s French children for the aging veterans.

Sellers, who earned his degree in media arts from Carolina, didn’t set out to be a World War II documentary filmmaker. After working in New York City, he returned to Columbia to start Coal Powered Filmworks, a production company.

But about six years ago, he was asked to help conduct interviews with a few World War II veterans in Greenville about the war and how their time in the service affected their lives in the years since. That day of interviews led to a partnership with the ETV Endowment of South Carolina, SC ETV and Jeff Wilkinson, a reporter with The State newspaper. What initially was planned as interviews with 13 or 15 veterans for an hour show grew to interviews with more than 200 veterans for an eight-hour series and three half-hour biographies.

The final chapter of his World War II work is “Return to Normandy,” a film that has earned Sellers a regional Emmy nomination in the director category.

“Their life and what they did is directly related to that two- to four-year span of time. As we got deeper into it, we started realizing here are people who, at a very malleable age, had seen so much. They had fallen in love or had a crush on someone overseas, but also had seen the horrors of war and death. They experienced these bonds through victories and serious defeats,” he says. “All these things shaped their life at 18 or 20 years old. It set up a foundation.”

Sellers and his team joined 22 veterans with South Carolina ties who returned to Normandy for the first time since the war to mark the 70th anniversary of the invasion.

“We didn’t know what we’d get, but we felt like we had to go. We followed these gentlemen around and talked to them. We were blown away from the minute we got off the first bus near Omaha Beach. They were mobbed like they were rock stars. It was incredible. And it was like that the whole trip,” he says. “The people there feel like they owe their lives and their kids’ lives to them.”

One returning veteran mentioned that he was surprised both by the children’s knowledge of the war and the reception the veterans received from young people. His words stuck with Sellers, who returned for the 72nd anniversary last June and interviewed French children during the ceremonies.

“We saw how much they genuinely revered these men, who were 70 and 80 years older than them. They knew their story and they knew why they were there. They hugged them and they cried. It was overwhelming. We said, ‘Well, that’s our story.’”

It was overwhelming for the veterans, too, many of whom initially said they weren’t fond of the French people and didn’t like the way they were treated during the war. “It was a healing moment when they went back and had this experience with these children. These children are alive and free because of their actions. That resonated in their interviews,” Sellers says.

The World War II work has allowed Sellers to attain the goal he set when he graduated from Carolina in 1996 – to be able to balance commercial and corporate branding work while creating his own independent films to air at festivals or on television.

“It took a long time. I was almost ready to say, ‘This is crazy.’ But I could see it coming. And once it happened it was like a snowball,” he says.

He said he was fortunate to have strong professors at Carolina, whose words and advice he remembered as he went after his dream.

“Two professors at USC really had a strong influence on, not so much in my career path, but how I worked and focused on that work. Mladen Milicevic had an irreverence toward mainstream work that really rubbed off on me. That irreverence really taught me to question how we communicate the messages in our work and to be as honest as possible. Harry Miller shared that irreverence but also pushed me to focus on the work itself. At any possible moment, Harry challenged me to think more and create more, just to keep working. In his office, he would repeat and repeat that the challenge for people who create is distraction from creating. And he was right.

“Early on in my career, when I wasn't making any money in filmmaking, falling back on the advice from these two men was a great motivator to keep moving forward.”