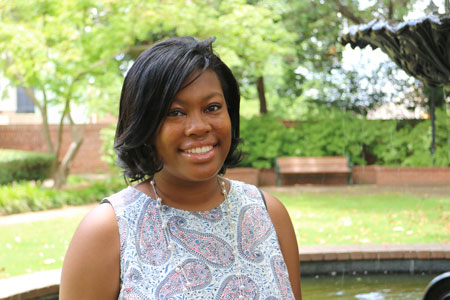 Inspired by her younger brother's struggles with ADHD, Sydney Bassard earned her public health degree in May and plans to become a speech/language pathologist.

When Sydney Bassard’s younger brother was diagnosed with attention deficit hyperactivity disorder, both of their lives changed for the better.

Andrew Bassard was going into sixth grade in 2015 when he received an explanation for his lifelong struggles in school and saw a near-immediate boost in his grades and confidence. Sydney Bassard, starting her sophomore year at the University of South Carolina, closely followed her brother’s progress — and discovered her career passion in the process.

“I saw a different person in him,” says Sydney, a 21-year-old from Charlotte, N.C. “He would read out loud without having to practice, and he could read words without struggling. He could independently do his homework. And the math problems that were a struggle for him no longer were because he could now finally read and comprehend what they were asking him.

“He got straight A’s in middle school. Before then, he was a B-C student.”

Intrigued, Sydney applied for a job at the resource center that helped her brother. Lindamood-Bell Learning Processes is an international program that uses sensory-cognitive instruction to improve individual reading comprehension.

One summer at Lindamood-Bell was all it took for Sydney to change her major from pre-pharmacy to public health to pursue her new dream of becoming a speech/language pathologist.

“I fell in love with the field. It was amazing,” she says. “I felt a sense of accomplishment that I wasn’t feeling with pharmacy, seeing kids go from below grade level to grade level or far above in a matter of weeks.”

Sydney says she worked to secure each child’s focus — a process that varied from person to person.

“Sometimes that would be building a fake fort in the middle of the center, and we’re climbing under our desks and I’m having you read words to me,” she says. “Or sometimes it would be us playing basketball, but before you can shoot the ball, you have to spell a word for me.

“I did not know that I had that kind of patience and love for children.”

When she returned to Carolina in fall 2016 for the start of her junior year, Sydney changed her major to public health. She worked with Kenn Apel as part of her senior Capstone project, which focused on viewing communications disorders as a public health issue affecting everything from driving safety to medical ethics. She also worked with assistant professor Krystal Werfel and still assists in her lab.

I had finally found my passion, and something that I really wanted to do.

Sydney graduated in May from the Arnold School of Public Health with a B.S. in public health. She started classes in the two-year master's in speech pathology program this summer.

Sydney’s confirmation that she made the right choice came during a session at Lindamood-Bell with Andrew, now 14.

“We got to have that interaction, not as brother and sister, but as clinician and client. We both got to kind of show off our different skill sets,” she says. “He was reading a book, and I asked follow-up reading comprehension questions to make sure he was understanding what he was reading.”

Her mid-stream major switch surprised her family, including her brother, Sydney says. “But I think he has an appreciation for the fact that I changed what I wanted to do after seeing him improve.

“I had finally found my passion, and something that I really wanted to do.”