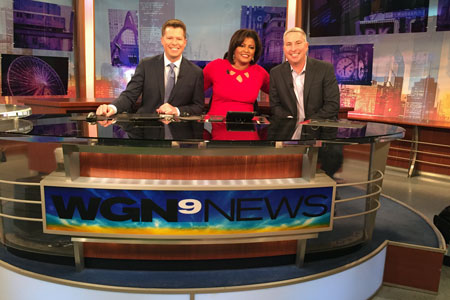 David Foreman (right) graduated from the College of Pharmacy in 1987 and is now known as the Herbal Pharmacist.

As a student at the University of South Carolina’s College of Pharmacy, David Foreman ’87 never anticipated his career would venture far from the traditional drugstore.

He lobbied the dean to take classes at the School of Business to develop his entrepreneurial acumen and built his savings to realize his dream of independent pharmacy ownership.

That preparation paid off when Foreman opened a Medicine Shoppe franchise in Colonial Heights, Virginia, at age 25 and within a few years operated one of the company’s top 70 pharmacies.

But after spending two weeks in Portland, Oregon, with his health-conscious brother-in-law, who was 20 years his senior but looked 10 years younger, Foreman shifted course. His brother-in-law’s secret to better health? Natural products. He urged Foreman to begin his own supplement regimen and enter that market.

Foreman had been searching for a new product line for his store and accepted the challenge, replacing one-third of his inventory with herbs, vitamins and supplements. But he decided if he was selling natural products, he would need to understand how they worked.

And so his mission to learn about natural products began, and from that a new career as a multimedia educator in natural medicine was born.

The College of Pharmacy gave me the education I needed to carry me through my life.

Foreman, nationally known as the Herbal Pharmacist, began talking to a registered nurse who had worked within natural medicine for 25 years and could provide the scientific rationale for product use and give examples of practical clinical applications for various natural remedies.

He experimented on himself as well as with friends and family. After a few years of self-study, he began to offer lectures in his store and then taught adult education classes at the local community college, which sold out.

Soon after, he was booked as a last-minute fill-in guest for a local radio station’s Sunday morning “Ask the Expert” call-in show. He was asked to write 20 questions about natural products that the host could pose in case the call volume was low. But the phones never stopped ringing, and he became a regular guest.

As he shifted away from traditional pharmacy into natural products, he sold his store, moved with his family to Florida and became a consultant to natural products companies. He was hired as a scientific adviser for the Vitamin Shoppe and authored a regular newsletter column, covering evergreen topics such as women’s health or men’s health, as well as timely topics, such as educating consumers about essential fatty acids when fish oil companies and flax seed oil companies were battling each other for market share.

A friend hired a publicist for him, which ramped up his media appearances. In 1998, he launched a nationally syndicated radio show, which led to a regular show on satellite radio that ran for two hours each weekday for 14 years. Although he retired from his radio show, he continues to make television and radio appearances nationwide and is active on his blog and social media accounts.

Foreman has lectured at major universities, including the Medical College of Virginia and the University of Michigan, and authored two books, Pillars of Health Heart Disease and Prescriptions From Nature: The Benefits of Herbs and Vitamins for Women.

He attributes his success to applying his clinical training to educate patients about the best products for them without profiting from that advice. Foreman credits his education at Carolina with helping him to sharpen his rigorous analytical skills and communicate effectively with patients.

“The College of Pharmacy gave me the education I needed to carry me through my life,” he said.

Foreman sees a path for natural medicine to work in tandem with traditional therapy to optimize patient health. For instance, some supplements can be used to treat medication side effects that would otherwise dampen patient compliance with their prescribed treatment, he said.

This spring, he returned to campus where he visited with faculty and students, and led a roundtable discussion about herbal pharmacy.