Neuroscientists test insulin as a possible preventative for age-related dementia 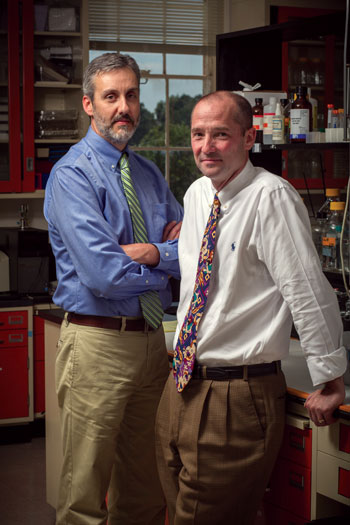 School of Medicine researchers Jim Fadel (left) and Larry Regan are looking at how insulin might help reduce age-related dementia.

Jim Fadel’s grandmother began to show signs that something was wrong even before her family noticed she was forgetting things.

“It really hit her after she fell and broke her hip,” Fadel says. “And this is what happens with a lot of elderly individuals; some kind of precipitating event like that seems to accelerate decline into dementia.”

Although his grandmother was never diagnosed with Alzheimer’s — it was the 1980s, when such diagnoses were rare — the School of Medicine researcher says that personal experience contributed to his interest in how physical changes can be a bellwether for future cognitive decline.

“Looking back, my grandmother, even before she started to manifest severe memory loss, did have a lot of weight loss,” Fadel says. “If you asked if she was eating, she would say, ‘I forgot to eat’ or ‘I wasn’t hungry.’”

Fadel and fellow School of Medicine researcher Larry Reagan are combining their cognitive powers to see whether one answer for preventing this decline could be found in a chemical already in the body, but not found as much in the brain: insulin.

Insulin is a neuropeptide that helps provide energy to cells and regulates blood-glucose levels. Too much insulin, and you have hypoglycemia, which can be deadly if untreated. Too little, and you have diabetes, which damages vital organs over a lifetime.

One important factor of the work Reagan and Fadel are doing, however, is in the delivery of the insulin. They want to see if a dose of insulin delivered through the nasal passages into the brain can stop or even reverse cognitive decline after it has started.

Reagan and Fadel started work at Carolina on the same day in 2002 in the Department of Pharmacology, Physiology and Neuroscience, and both say it is the collegial and cooperative nature of researchers at the university that drew them and have kept them here for the past 15 years.

Reagan’s research also looks at issues that often coexist with diabetes: depression and Alzheimer’s disease. Fadel studies the impacts of metabolic disorders, including diabetes, on parts of the brain that control physiological as well as cognitive function.

Together, they were recently awarded a $100,000 grant to establish the John D. and Patricia L. Beckler Fellowship in Alzheimer’s and Cognitive Diseases Fund. The fellowship will provide a stipend for a neuroscience doctoral candidate to study the mechanistic basis of age-related cognitive decline.

Patricia and John Beckler lived in Columbia for most of the second half of the 20th century. He was a former president of Carolina Eastman Co. and was diagnosed with dementia, memory loss and possibly Alzheimer’s just months after his retirement in 1996. Patricia Beckler wrote a book, “The Long Goodbye,” about the last 14 years of their lives together following his diagnosis.

Fadel and Reagan say one of the best parts of the gift Beckler made to the School of Medicine is that it will support not only their research, but also the creation of a new Ph.D. in the field.

“Supporting the training of a new scientist who’s got a career interest in aging and cognitive decline is going to have a multiplier effect by supporting the development of that career downstream,” Fadel says.

The first order of business will be to see how insulin, delivered intranasally, affects the hippocampus and other brain areas in rodent models.

“We will deliver insulin intranasally, and we’re going to see what parts of the brain are activated,” Fadel says. “We’re looking for a robust picture of how insulin, when it’s delivered intranasally, affects multiple brain areas and how does that play into cognitive function.”

“The drugs that we have to treat cognitive decline don’t work very well. And it’s probably because by the time somebody has severe memory loss or dementia and we put them on these drugs, the horse has left the barn, so to speak.”

“So one of the hypotheses that has been put forward is that insulin activity in the brain is reduced in patients with Alzheimer’s, and that is the source of their cognitive dysfunction, among other things,” Reagan says. “I think even those of us who like that hypothesis and are working to test it believe there are lots of factors involved, but insulin certainly is one of the players.”

By looking at a narrow path, the researchers hope to find a cause and effect. Currently, Alzheimer’s can be diagnosed officially only after a patient has died and their brain is examined. Whether the lack of insulin activity in the brain is a cause or whether the brain becomes insulin resistant as a result of the Alzheimer’s is not clear.

“What you want to be able to do is to target the cause of the disease rather than treat the symptoms,” Reagan says. “With Alzheimer’s disease, if deficits in insulin signaling in the brain is just a consequence, then treating that might not help, whereas if it’s a cause, then absolutely it’s going to help.

“This is one of the things my lab is able to do: disentangle cause from consequence. It’s very difficult to do in the clinical setting.”

Figuring out the why

Reagan says there have been tests involving subjects with no cognitive decline and no other issues, like diabetes. The subjects showed an increase in cognitive function, compared with their own established baselines, after a dose of insulin taken intranasally. So scientists know that insulin can affect cognitive function; they just don’t know how or why.

“Some might say, 'Who cares how it works as long as it works,' and there is some validity to that,” Reagan says. “The patient who has Alzheimer’s doesn’t care how it really works.”

But if insulin's effect can be established, it could apply to other central nervous disorders associated with diabetes and obesity.

“There is a nice continuum that the higher the body mass index is, the more likely a person is to show central nervous system deficits, whether that’s cognition or depressive illness,” Reagan says.

While people with diabetes might be at an increased risk of developing dementia, Alzheimer’s or other forms of cognitive decline, it’s not always the case that a brain that has become insulin resistant also belongs to a diabetic.

That is one reason for using the insulin through the nose: to keep it from affecting the rest of the body while delivering it right where it is needed. Under normal conditions, insulin does not cross the blood-brain barrier very well, Fadel says, and as a consequence very little actually makes its way to the brain.

“Basically you’re just activating a highway, which leads to increased activity in brain regions like the hippocampus,” Reagan says.

Both men say their research is unlikely to be a silver bullet for the treatment of Alzheimer’s disease. But one key piece of the puzzle for any drug or treatment that might be indicated by their research will be starting it early enough to be effective.

“That’s really important because the drugs that we have to treat cognitive decline don’t work very well,” Fadel says. “And it’s probably because by the time somebody has severe memory loss or dementia and we put them on these drugs, the horse has left the barn, so to speak.”

Most of us will experience some deterioration in our memories and cognitive function as we age. Forgetting your grandchild’s name is one thing; forgetting you have a grandchild is quite another.

“There are changes in cognitive function that happen just as part of normal aging, but those tend to be pretty mild and don’t affect the ability of an otherwise healthy person to live independently, take care of him- or herself, have a normal social life,” Fadel says. “But when those things become more severe, that’s really an indicator of something else happening in the brain, and these are processes that aren’t normal. We can hopefully address those.”