It’s half past noon and your stomach has started grumbling in a language all its own but with a message that’s easily translated: Feed me!

“It’s one of our basic urges. If we don't eat, we don't have energy to survive,” says Claudia Grillo, a research associate professor in physiology, pharmacology and neuroscience at the University of South Carolina's School of Medicine. 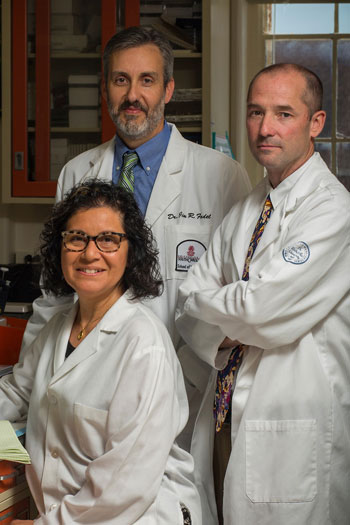 Claudia Grillo and her research colleagues Jim Fadel, left and Larry Reagan, all faculty members in the School of Medicine's Department of Physiology, Pharmacology and Neuroscienceges. "If we don’t eat, we don’t have energy to survive,” says Claudia Grillo, a research associate professor.

Grillo is keenly interested in the neurological pathways that govern our hunger drive, especially an obscure circuit that involves the raphe, a collection of nuclei in the midbrain. Grillo’s research has demonstrated that the raphe has receptors for a hormone called leptin that’s produced by fatty tissue. She was recently awarded a four-year, $900,000 grant from the National Science Foundation to investigate the interplay between leptin and the raphe.

Scientists have extensively studied leptin’s effect on the hypothalamus, an almond-sized part of the brain that helps to regulate body temperature, sleep, thirst and hunger. “But it’s important that we understand all of the mechanisms that can regulate hunger,” Grillo says. Her research shows that the raphe is stimulated by leptin to produce and release a mood-regulating neurotransmitter called serotonin, which has a dampening effect on hunger.

“But the more adipose tissue you have, the more leptin you produce,” Grillo says. And similar to insulin resistance in Type 2 diabetes, very high levels of leptin lead to leptin resistance. In that scenario, leptin’s signals to the brain that you don’t need more to eat are eventually ignored.

“My major interest is to identify novel circuits that regulate food intake, which will allow us to identify new targets for the development of therapeutic strategies to treat obesity,” Grillo says.

Leptin and its associated neurological circuits in the brain help explain physiological hunger — the drive to eat that keeps us alive. But what about the “drive” to eat an entire bag of popcorn or chocolate chip cookies long after your stomach has reached the point of satiety?

That pleasure drive is called hedonic hunger, Grillo says. Hedonic hunger might lead us to eat too much or, if we’re feeling sad, might temporarily suppress hunger. Understanding the neurological circuits that drive hedonic hunger is on Grillo’s future to-do list.

“Maybe at some point I will go into that field. Probably the mechanisms are not so different than those driving physiological hunger,” she says. “Certainly, hedonic hunger is a big component of the obesity epidemic.”

For now, Grillo will be busy studying the raphe/leptin circuit and getting ready to welcome two undergraduate students to her lab for a summer internship component of the NSF grant. The idea is to recruit interns from populations under represented in science and medicine and provide experiential learning opportunities that create a foundation for future success in biomedical or basic research.

“Maybe if they study hunger in my lab, they’ll develop a hunger for a career in science,” Grillo quips.