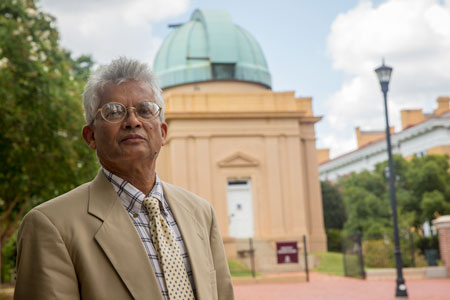 Physics and astronomy professor Timir Datta, seen here at the Melton Observatory on campus, will recreate a century-old experiment during the Aug. 21 solar eclipse.

What does Albert Einstein have to do with the solar eclipse you’ve been hearing so much about? Turns out that a total solar eclipse — when the moon orbits directly in front of the sun — is the perfect time to test Einstein’s theory of general relativity.

That’s what happened in 1919, when British astronomer and physicist Sir Arthur Eddington used the total solar eclipse to measure how stars shift when they are close to the sun, validating Einstein’s then 4-year-old theory.

University of South Carolina physics and astronomy professor Timir Datta will recreate the historic experiment on Aug. 21, when Columbia will be home to the longest total solar eclipse for a metro area on the East Coast. Working with students and other astronomers, Datta will use modern technology, high-powered telescopes and cameras to record the sky over South Carolina.

“People say Eddington’s experiment is one of the most noted experiments of the last century because it had such a big impact. It pulled out Einstein from being almost unheard of — some closet scientist. Worldwide, it made a big impact because it showed that there’s more to gravity than Newton,” Datta says. “That’s one reason I want to revisit it.”

Eddington led an expedition to Africa where he photographed the stars near the sun during the eclipse on May 29, 1919. His research confirmed Einstein’s theory that as stars pass near the sun they appear to bend because their light is curved by the gravitational field. Because the sun is normally so bright, it is difficult to see the stars around it, but the curves of light are noticeable during a total solar eclipse, when the sun’s light is directly blocked by the moon.

While Sir Isaac Newton also predicted that light will bend around a large object like the sun, the two theories diverged regarding the influence of gravity on light. Einstein showed it wasn’t the gravity of the stars that was pulling the light, but rather the space-time that is created that causes stars to bend. When Eddington’s research was published, it was hailed as proof that Einstein’s general relativity theory surpassed Newton’s model. Headlines in The New York Times on Nov. 10, 1919, read, “Men of Science More or Less Agog Over Results of Eclipse Observation” and “Einstein Theory Triumphs.”

At 2:41 p.m. on Aug. 21, when the Columbia area will go dark for about 2 minutes and 36 seconds, Datta will recreate the experiment with the benefit of equipment that wasn’t available to Eddington nearly 100 years ago. Yet Datta expects the results will stay the same.

In the experiment, Datta, other astronomers and some of his former students who will travel to South Carolina from places including Turkey and South Korea, will take pictures of a section of the sky during the eclipse, and look at the same stars six months later. They expect to show that the stars that are closest to the sun are bending more, while those farther away are bending appropriately less.

He hopes to take photographs using the large telescopes at the Melton Observatory on the university’s campus, but the team is developing a backup plan if the weather forecast calls for storms. If that happens, they will take portable equipment to go to the nearest spot where good weather is predicted.

“If we’re lucky, we’ll find 20 stars in the field of view that we’ll analyze and see if their position today is different six months later,” he says. “I don’t have any doubt that Einstein is right. The idea is not to disprove, but to revisit a historical experiment. We want to use today’s technology to revisit and hopefully get some young people involved and interested. And lucky for us, we don’t have to travel too far.

"This is something we will do for pleasure.” 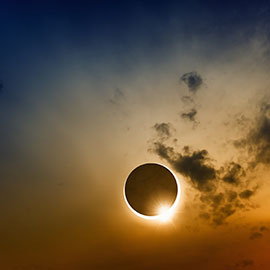