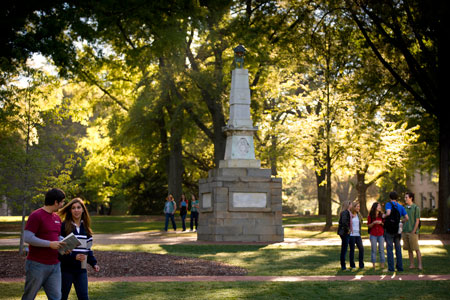 UofSC has doubled the number of its Stamps Scholarships, the most prestigious undergraduate scholarship the university offers, to 10 per entering class per year.

The University of South Carolina has a long history of attracting the best and brightest students to the university and its top-ranked South Carolina Honors College with significant funded scholarships.

Five exemplary out-of-state students will join those ranks with the help of a gift from the Stamps Family Charitable Foundation, founded by Penny and E. Roe Stamps IV of Miami.

“This is such welcome news. I am appreciative of the Stamps Family Charitable Foundation for doubling the number of these highly competitive scholarships," says university President Harris Pastides. “The Stamps Scholarship and its unique enrichment fund encourages fresh, new opportunities for students to innovate, dream, create and collaborate at Carolina. I am appreciative to Penny and Roe Stamps for making these extraordinary scholarly experiences possible.”

This new cohort of Stamps Scholars enhances the university’s Top Scholar program, which includes the Carolina Scholars Award, the oldest merit scholarship that began in 1969, and Hamilton Scholars for in-state students and the McNair Scholars Award, the university’s original out-of-state scholarship established in 1998 with the support of a $30 million gift from university alumnus Robert McNair and his wife Janice McNair, and Horseshoe Scholars for out-of-state students.

“We are thankful for the continued support of the Stamps Family Charitable Foundation and the trust the Stamps have placed in our university. These scholarships help us to continue to attract the most talented students — inside and outside of South Carolina — to the South Carolina Honors College,” says Steve Lynn, dean of the Honors College. “Stamps Scholars contribute greatly to the college’s vibrant and intellectual community.”

In addition to an annual scholarship of up to $20,000 for four years, Stamps Scholars are awarded an enrichment fund of $10,000 to use for endeavors such as study abroad, internships and undergraduate research. That signature benefit reflects the university’s national reputation for offering an outstanding student experience. The Stamps Charitable Foundation hosts a biennial national convention, convening all Stamps Scholars from across the nation for a weekend of networking, learning and intellectual conversation. Currently the foundation partners with 40 colleges and universities.

“The four years that students spend as undergraduates are exceedingly important for their development,” says Roe Stamps, benefactor of the Stamps Scholar program and a venture capitalist with degrees from Georgia Tech and Harvard Business School. “There are so many things to learn and so many things to do during those years, many of which are outside the classroom. Our financial assistance enables young men and women to take best advantage of the experience.”

“I really enjoyed the Stamps Convention this spring as a perk of being a scholar, because it connected me to an entire network of like-minded students in a variety of fields. The enrichment funds have been a huge benefit. I am using part of mine this summer to go to France, which is exciting,” Cooney says.

Junior biology major Stephanie Munie values the network she has built as a Stamps Scholar.

“As a Stamps Scholar, I love being part of a tightly knit group of highly capable and caring students. Whenever we get together for meetings or activities, we all connect so well and grow from each other’s experiences and skills,“ Munie says. “I think collaboration is at the core of the Stamps program, which is why the National Convention is a very powerful weekend. I enjoyed meeting students from across the nation, and all of their stories really impacted how I see the world, service and leadership.”