Weather is the top question on people’s minds when looking ahead to Aug. 21 — the day the historic total solar eclipse crosses the continental United States. 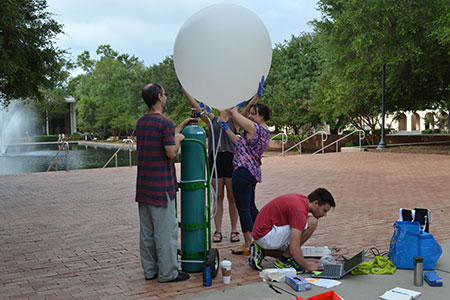 April Hiscox, a meterologist in the geography department, will deploy helium-filled weather balloons equipped with sensors to take a variety of measurements in the atomosphere during the Aug. 21 total eclipse.

None more so than University of South Carolina geography professor April Hiscox and her research team who are looking beyond the forecast into what effects the eclipse might have on the near-surface atmosphere.

Hiscox, a meteorologist in the College of Arts and Sciences’ geography department, plans to launch a series of helium-filled weather balloons before, during and after the eclipse to measure temperature, pressure, relative humidity and wind speed and direction. The experiment, part of a nationwide data collection effort, will take place along the eclipse’s direct path at Boy Scout Camp Barstow in Saluda County, South Carolina, near Lake Murray.

She specifically will look at how the air changes during the eclipse and what impact that may have on the boundary layer, the area of the earth’s atmosphere closest to the surface.

The daily transition from day to night affects how air moves in the atmosphere and how weather fronts can be driven.

“That happens every day, but during the eclipse it’s happening on a very short time scale and at a time when it normally wouldn’t,” Hiscox says. “We’re now sort of putting a few minutes of midnight in the middle of the day so it’s interesting to see what that’s going to do.”

The eclipse research is just one small segment that could provide insight into the overall picture of boundary layer.

“If we had a universal understanding of boundary layer dynamics, we could understand how carbon fluxes, how methane fluxes, basically how any change we make to the surface could affect the atmosphere,” Hiscox says.

Michael Stewart, a graduate student in geography, will be at the camp Aug. 21 watching data from the balloons carefully to spot a gravity wave. This wave of turbulence could occur during the eclipse when air is moving and trying to regain its buoyancy. 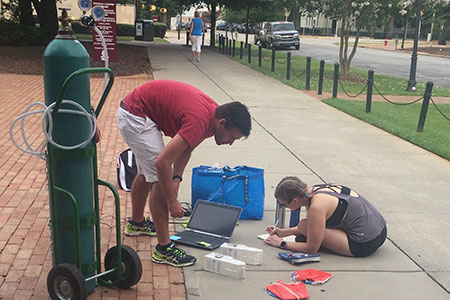 Scientists don’t know exactly what sparks these waves, but one theory is a loss of radiation can drive the waves. Researchers in Greece studied this during a 2015 solar eclipse but were unable to make a direct connection because of adverse weather conditions.

Stewart’s master’s thesis will focus on the gravity wave question, and he’s counting down the days until the total eclipse.

“I was always interested in astronomy when I was growing up,” he says. “Now being able to take these two areas that I’m interested in — when I stop and think about it — it’s the craziest and most exciting thing.”

Alexandria McCombs, a post-doctoral fellow working in Hiscox’s lab, is helping prepare for the experiment, including working with Stewart to organize and test equipment prior to Aug. 21. The two joined Hiscox and geography professor Greg Carbone during a recent dress rehearsal balloon launch on campus.

“It’s really exciting because we get to go out and put the experiment all together from start to finish,” McCombs says. “As young scientists, that’s not something you always get the opportunity to do early in your careers. The eclipse is one of those experiences that we will never have again for the rest of our careers.”