University horticulturalist extends his creative side with painting 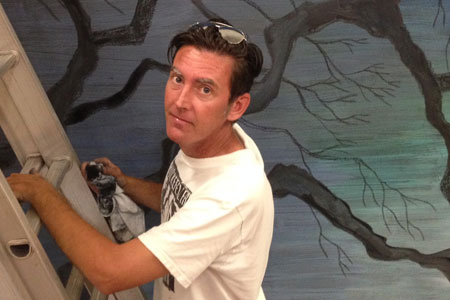 Dave Robbins' chalkboard "painting" will be on display in the School of Music Library during the fall 2017 semester.

Years ago, Dave Robbins debated whether to pursue art school or horticulture. He settled on the latter, and for nearly 20 years, plants and flowers have been his creative "palette."

“I was able to fuse the two things I love with landscape design — art and horticulture,” says Robbins, a horticultural specialist who maintains gardens at the President’s House and the rose garden at Lieber College on the Horseshoe.

“It’s a wonderful environment that definitely gives me a lot of creative freedom,” he says. “Also, I get to dig in the dirt. I’m a plant nerd.”

But Robbins’ artwork isn’t found only in the soil anymore. He took up painting several years ago, and his work has been featured at Tapp’s on Main and other Columbia art venues. One of his latest works can be seen at the School of Music library, where a massive chalkboard showcases a different artist each semester. A reception for Robbins will be held Friday Sept. 29 at the music library from 5:30 to 8 p.m.

His music library piece reflects the themes found in many of his acrylic paintings: landscapes of bare trees, still water and delicate reflections.

“Normally, my trees don’t have foliage on them,” he says. “It’s not necessarily that I want them to appear cold or dark, but I just find the structure of a tree quite a beautiful thing. It’s the bare bones that I’m interested in, the structure itself.”

Robbins’ artistic color palette usually hews toward cooler tones of blue, white, gray and black with an occasional accent of yellow or brown.

“I feel like colder tones make for a more tranquil scene,” he says. “A lot of people say my work makes them think of something eerie or dark, but that’s not necessarily my intentions. I like to say it’s a little bit moody, not scary or ominous.”

To create the chalkboard art at the music library, Robbins had to adapt his painting technique to a new medium. He first chalked over the entire wall in his usual colors, then wiped it with a 2-inch brush, creating the visual effect of an impressionistic painting. He then sketched in a stand of trees beside a pond in a scene reminiscent of a swamp in winter, bare limbs reaching up to an overcast sky.

“The funny thing is, I hated painting back in high school. I was more into photography and drawing and ceramics back then,” he says. “But when I started painting a few years ago, it was like a lightbulb went on, and I was like, ‘Man, what have I been doing all these years?’ ”