From the battlefield to the classroom

Mario Reyes is pursuing his dream after seven tours of duty as a U.S. Army Ranger, including one of the most memorable in history

It’s a good bet that some of Mario Reyes’ classmates in his athletic training graduate school courses at the University of South Carolina have pretended to be him — on a video screen, at least.

Reyes, now 34, was 22 when he was part of Operation Red Wings, a 14-day U.S. Army Ranger recovery mission in Afghanistan in 2005. Reyes and his fellow Rangers recovered the bodies of 16 soldiers whose helicopter was shot down during the attempted rescue of four U.S. Navy SEALS. 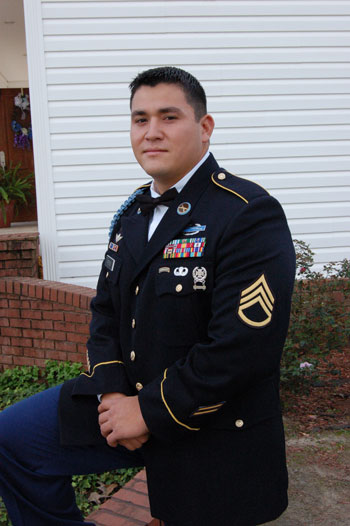 Mario Reyes, now a graduate student in athletic training at the Arnold School of Public Health, served seven tours of duty as a U.S. Army Ranger. He was part of a storied 2005 rescue mission in Afghanistan that became the subject of the book and motion picture "Lone Survivor."

The mission, followed by news organizations around the world and later the subject of a book and a movie, also rescued the only surviving SEAL, Marcus Luttrell.

“That was my job. My job was to be a fighter,” Reyes says. “People play video games to act like they’re doing what I have done.”

Reyes joined the Army out of high school. Growing up with good grades but without much money in South Florida, he didn’t consider college an immediate possibility.

“I was only going to do four years and make money, and then go to college,” he says. “That didn’t happen, so I re-enlisted twice, and did 10 years.”

Reyes enlisted before Sept. 11, 2001. He was home for the weekend from Airborne School — where he jumped out of the first plane he had even been in — when an uncle predicted he would probably be going to war soon.

At 19, Reyes deployed for the first time. Three years later, on his fifth combat tour, he found himself dropping from a helicopter onto a mountainside lit by intermittent fire from Taliban troops.

“It’s scary,” Reyes says. “You don’t know the terrain. You know the enemy is around you; you just don’t know where.”

Four SEALS had been ambushed, with three killed, during an operation in the Kunar Province. A Chinook helicopter sent to their aid was shot down, killing the eight SEALS and eight Army Special Operations aviators on board.

Once Reyes and his fellow U.S. Rangers of Charlie Company, 2nd Battalion, reached the crash site, their hopes of a rescue mission faded.

“I’ve seen bodies. It’s a product of war,” Reyes says. “Being a Ranger in Special Operations, you really don’t think about that. We knew Americans were killed. We don’t leave anybody behind.”

Word reached the Rangers that one of the four ambushed SEALS had been spotted in a nearby village. The Rangers picked their way back down the mountain and found Luttrell, badly wounded but alive.

I guess that’s one of the proudest moments in my military career, because I know that there’s at least one American that’s alive because of what I’ve done.

Despite being shot, Luttrell had walked seven miles to the village, where he was given shelter by an Afghan tribe. His book chronicling his ordeal, “Lone Survivor,” became a movie starring Mark Wahlberg.

“When I first saw him, I picked him up,” Reyes says. “I guess that’s one of the proudest moments in my military career, because I know that there’s at least one American that’s alive because of what I’ve done.”

“Mario was quite the epitome of what we think a Ranger should look like —  young, a big, barrel-chested guy who could pack a machine gun and 80 pounds of gear,” Moore says. “Even to this day, if I had to be in a gunfight, I’d want Mario to stand next to me on my left or on my right.”

Reyes deployed for two more combat tours — the last one spanning 18 months from 2007-08 in Iraq — before deciding he had had enough.

“My card was eventually going to get pulled if I kept doing it,” he says. “I had just gotten married and I wanted a college degree. I decided it was time to go. After seven combat deployments and seeing and doing what I do, I was done with war.”

Reyes got a construction degree from the University of West Florida in Pensacola but was more intrigued by his wife’s career as an athletic trainer. He got a degree in that, too, and began looking to pursue a master’s at a Division I school.

“South Carolina was the one that stood out the most and offered me a position,” Reyes says. His wife, Breanna Reyes, is the athletic trainer for the Gamecocks’ swimming and diving teams. “South Carolina has turned out to be the place where me and my wife were meant to be.”

That’s not to say transitioning to civilian and student life has been easy.

“It’s been hard to get to understand this generation’s mentality,” says Reyes, on pace to graduate next year. “I love technology, but I also know how to work hard. I raised farm animals, I know how it is to work outside. The difficult part for me was trying to be a student with kids that are 10 years younger than me and trying to become friends with them. They see me as older guy, and I see them as kids.”

But Reyes has become accustomed to handling unexpected twists.

“If you had asked me 10 years ago if I was going to be a graduate student at the University of South Carolina, I would have told you heck no,” he says. “It just didn’t seem possible. Now, it’s like, ‘Wow. I have two degrees and a master’s in the works.’

“I’m working towards that American dream that I fought for.”