The game before the game 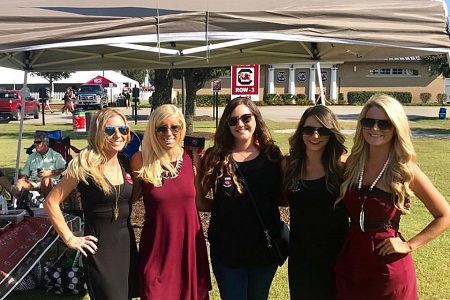 Fans tailgating before the first UofSC home football game of 2017

For college football fans in Columbia and across the country, tailgating has become a tradition as ingrained in the fall Saturday experience as what happens inside the stadium.

The University of South Carolina boasts one of the best tailgating scenes in the nation (ranked No. 5 nationally for 2017 by Bleacher Report, a website devoted to sports and fan experiences), and its faculty includes one of the world’s leading experts on tailgating.

Andy Gillentine, a professor of sport and entertainment management, began doing research on tailgating 20 years ago, as he and colleagues in the sport management field noticed tailgating becoming more prevalent.

“We got in right before it exploded,” he said. "It started opening up and we said, 'Okay, we have a new phenomenon.' "

Gillentine’s research has uncovered examples of tailgating reaching all the way back to the Roman Empire, but until the last two decades, tailgates were organic events, rarely if ever planned on a large scale or organized by any business or governing body.

What people want is that sense of community. It's this big open house feel.

That’s all changed, as any college football fan knows. A study performed by the university’s College of Hospitality, Retail and Sport Management found that an average of 16,000 people come to Gamecocks home football games just to tailgate, never setting foot inside the stadium.

"They appreciate the tailgating experience so much they just stay in the parking lot," Gillentine said. "What people want is that sense of community. It's this big open house feel."

Gillentine and his colleagues, at the university and elsewhere, have found that sense of community is the central reason for the growth of tailgating not only at college football games, but also at concerts (most notably, Jimmy Buffett shows) and various other events.

“It’s a way to socialize with others of like mind,” he said. "Over the years, it's grown and become more elaborate just like the events themselves."

Tailgates in decades past were often as simple as a small group sharing chips and drinks out of the back of a car. Now, fans bring grills and prepare feasts to match many restaurants, and from parking lot games to live bands, tailgating has become an industry.

"The more amenities you can offer people, the more they're willing to pay,” Gillentine said.

With Gamecock Park opening in 2012 to join the Cockabooses, the State Fairgrounds tailgating scene, and all the rest, the area around Williams-Brice Stadium has become a tailgating paradise.

"It's like nothing anywhere else,” Gillentine said. "Ours offers so many unique things to explore and look at."

Gillentine recently traveled to Switzerland to present research done with colleagues from other universities about the potential for tailgating to catch on at major events in Europe.

His research has touched every part of the tailgating experience, from security to amenities to access for people with special needs to traffic and other safety concerns.

"I think the work that we've done over the years has been beneficial," he said. That work has included addressing safety, access and traffic concerns.

Gillentine finds no signs of the phenomenon slowing down and hopes to find ways to make the fan experience even better in Columbia and elsewhere.

"The whole area around Williams-Brice could become a Gamecock Walk type setting. It would be fantastic,” he said. "People don't mind paying for it if it's better."

In the meantime, he cited the Bleacher Report ranking as something to be proud of for Columbia fans and for all the people, from vendors to parking attendants to police officers, who work to make fall Saturdays at Williams-Brice experiences to look back on fondly for a lifetime.

"To think we're putting together a nice enough setting, to be in that grouping means we're doing things correctly,” he said.