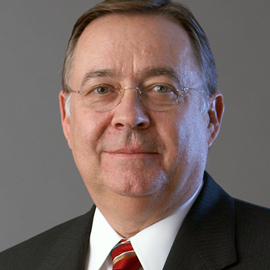 The Algernon Sydney Sullivan Award honors an outstanding graduate, demonstrating professional excellence of character and service to humanity and is the highest honor awarded to Carolina alumni.

Lee Thomas’ long career took him from public service during a tumultuous period of environmental disasters in the U.S. and abroad to a long stint in the corporate world.

Thomas grew up in a family geared toward public service — both of his parents served as mayor of his hometown of Ridgeway, S.C., and he served on the city council. He joined state government, working in public safety for three different S.C. governors before becoming deputy director of the Federal Emergency Management Agency during President Reagan’s first administration.

In the early 1980s, Thomas was tapped to join the EPA, which was at the center of several major issues, including the aftermath of the Three Mile Island nuclear accident and a lawsuit surrounding the Love Canal toxic dumpsite.

Thomas was deputy administrator before becoming administrator for Reagan’s second term. During his tenure, the agency also had to deal with the Bhopal disaster in India and the Chernobyl nuclear accident in Ukraine.

“To know that this cloud of radiation basically was going to circle the earth in about seven days, and it was going to show up on our West Coast, and there was not one single thing any of us could do about it,” Thomas said in an oral history interview with the EPA.

“We monitored it as it went across the U.S. — very small levels, not anything that would have any impact on health, but it gave you a sense of what kind of impact any kind of radioactive event such as war would have. It was very sobering to realize once it started, there was nothing mankind could do about it in terms of the impact.”

After his public service career ended, Thomas was chairman and CEO of Law Companies Environmental Group Inc., a national environmental engineering company. In 1993, he joined Georgia-Pacific, where he served as president, chief operating officer and board member. Thomas joined the board of Rayonier in 2006 and was appointed CEO the following year. He retired in 2012, and he and his wife, Dorothy, live in Jacksonville, Fla.