New institute to carry on professor’s vision of interdisciplinary work

Ann Johnson was a longtime — and much-loved — faculty member in the College of Arts and Sciences’ history and philosophy departments.

With a background in the history and philosophy of science, Johnson was well known for bridging gaps between history, philosophy, engineering and technology. 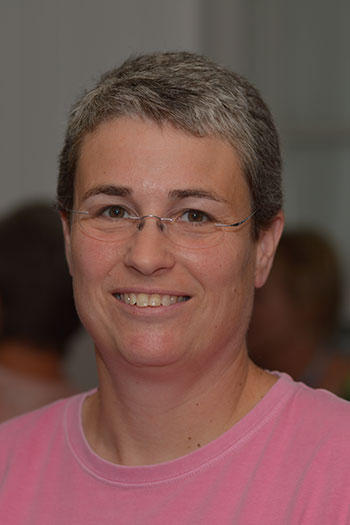 Ann Johnson was a history and philosophy professor who was known for bringing together an intellectually diverse community of scholars. Her family established the Ann Johnson Institute for Science, Technology and Society in her honor.

Johnson left Carolina to join the faculty at Cornell University in 2015, but her legacy here has endured, particularly her ability to bring together an intellectually diverse community of scholars from across campus.

Not long after Johnson died in December 2016, James Johnson, his wife, Elaine, and daughter Katherine decided to establish and endow the Ann Johnson Institute for Science, Technology & Society. Housed in the College of Arts and Sciences, the institute’s goal is to continue Ann’s work in promoting interdisciplinary efforts focusing on science and technology studies.

“Since her death, we’ve heard from many people about her efforts to assist others and to help people work together,” James Johnson says. “We’ve been very pleased — humbled actually — by those comments about Ann’s efforts on behalf of others."

James Johnson and his family founded the institute at Carolina in his daughter's honor after numerous conversations with her former colleagues and college leadership.

“We hope, and feel pretty confident, that both USC students and faculty will benefit from the institute’s work, broadening their knowledge, their skills and their general understanding of how their world came to be and some of the things the future might hold,” James Johnson says.

Philosophy professor Leah McClimans recalls a trip she and history professor Allison Marsh took to Ithaca, New York, shortly before their friend’s death. At the time, Ann Johnson told McClimans and Marsh that they should “pass it on.”

“I think this is a good way to honor Ann’s wishes that we pass it on,” says McClimans, who considered Johnson a mentor. “It’s a really concrete way in which her parents were able to make financial contributions and make it possible for the college to support programs that will honor Ann’s legacy in interdisciplinary work, in supporting communities of scholars and really thinking about people holistically.”

The institute officially launched in fall 2017 and held its first events during Parents Weekend with a series of hands-on activities such as an open lab session on forensic anthropology, a geology field trip and tours with McKissick Museum’s natural science curator.

“Combining the strength of tradition with the energy of innovation, our college equips students with critical thinking skills necessary for careers in today’s global economy,” says Lacy K. Ford, dean of the College of Arts and Sciences. “The Ann Johnson Institute for Science, Technology and Society will provide increased opportunity for teaching and learning across disciplines and enable us to continue forging those crucial relationships among arts, humanities and sciences. We are extremely honored the Johnson family chose our college to continue their daughter’s tremendous work and know our students, faculty and state will benefit from this institute far into the future.”

James Johnson, who lives in Statesboro, Georgia, looks forward to attending as many of the institute’s events as possible.

“Parents are never prepared for the death of a child; that’s just not the order in which things are supposed to happen,” he says. “We so wish that Ann were here to participate in the institute’s work and to help guide it. We think she’d be extremely pleased to see her academic goals being advanced.”