Maybe you’re familiar with the annual Thanksgiving for Internationals dinner at Columbia restaurant Immaculate Consumption; maybe you’re not. Either way, you can appreciate the spirit of the event. 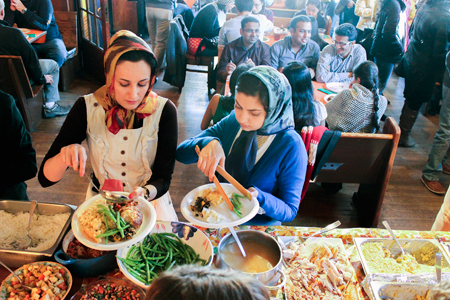 “It’s terrifying to see the huge crowd lined up for the food, but we always manage to make it through, and there’s always enough for everyone.” — Travis Weatherford

Started in 2007 by USC immigration information coordinator Travis Weatherford and several university colleagues, the off-campus feast introduces international students to the American holiday and gives them a place to enjoy it. Ten years on, it has become something even greater.

“We try to find the people who are here short-term, but we’ve had students show up for four or five years consecutively,” says Weatherford, ’93. “We’ve become like their surrogate family.”

Narges Kaveshgar is a prime example. A native of Iran, Kaveshgar came to Carolina to pursue a Ph.D. in civil engineering in 2010 and attended half a dozen of the dinners before moving to Memphis, Tenn., in 2016.

“It made me feel at home, even though I was thousands of miles away from home,” says Kaveshgar, now a project engineer at FedEx. “This is going to be the first year that I’m away from USC on Thanksgiving, and I definitely will miss the warmth that you feel sitting around the table with your friends and family.”

The volunteers return year after year for similar reasons: to break bread with people who might otherwise be alone, to share American holiday customs, to watch guests smile after their first-ever bite of pumpkin pie.

“It’s always thrilling,” says Weatherford. “It’s terrifying to see the huge crowd lined up for the food, but we always manage to make it through, and there’s always enough for everyone.”

We have 1,400 or so international students who have chosen to come to my state, to my university, when they could have gone anywhere. It’s the least we can do to show our gratitude because they enrich the university so much and they enrich the community so much.

There’s also more than enough turkey — courtesy of Weatherford, who roasts five or six birds each year in the Immaculate Consumption ovens, and Greg Wilsbacher, a curator at USC’s Moving Image Research Collections, who prepares a Norman Rockwell-caliber “show bird” for wow-factor photographs.

Everyone pitches in on the big day, but Weatherford, who also holds a degree in pastry making from the Culinary Institute of America, is chef de cuisine. In addition to turkey roasting duties, he prepares additional sides and desserts. Not surprisingly, he and his girlfriend, Julia, are in high demand.

“Our main goal is to dish out and explain the food, and frankly, insist that Travis go out and enjoy his extended family, because they want to talk and laugh with him,” says Wilsbacher. “By the end of the meal, groups of students are seeking him out to have their picture taken with him, sometimes even wielding a drumstick!”

One appreciative student, Naveed Sadiq, came to USC’s Arnold School of Public Health on a Fulbright Scholarship in 2010 to pursue a Ph.D. in health services policy and management. He attended the event twice before returning to Pakistan.

“I can still recall in my mind Travis, Julia and the supporting staff beside him, introducing themselves, talking about the roots of the event, and the food,” he says. “And at the end of the party, he thanked all of us for being part of his Thanksgiving, with everyone standing there to bid us goodbye.”

But gratitude is a circular deal. Weatherford thanks restaurateur Rob Reed, ’87, ’92, for donating the kitchen at Immaculate Consumption, and he thanks his guests for sharing traditions from their own cultures around the American holiday table.

“I grew up in York County, just imagining all these places around the world,” Weatherford says. “Now, we have 1,400 or so international students who have chosen to come to my state, to my university, when they could have gone anywhere. It’s the least we can do to show our gratitude because they enrich the university so much and they enrich the community so much.”

All of which makes this year bittersweet for Weatherford, who has announced that the tenth Thanksgiving for Internationals will likely be the last.

“I don’t want it to keep us away from our own families,” says Weatherford, whose aging parents live in Rock Hill and have an increasingly hard time making it to Columbia. “It’s not as meaningful to me if my own parents can’t come. And 10 years is a nice even number to end with.”

But won’t he then just miss his other family? The students whose RSVPs fill his inbox every October and then line up at the buffet in November, excited about their first Thanksgiving?

“Yeah, absolutely,” he says with a chuckle. “Which is probably why November next year I may be saying, ‘Why don’t we do another one?’”