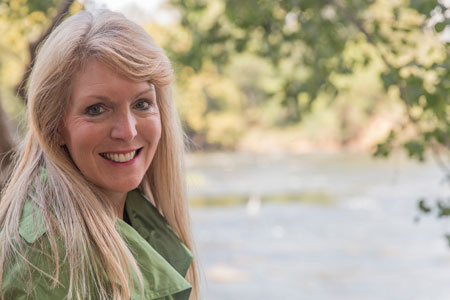 It might make you want to hold your nose before taking a sip, but ‘toilet to tap’ is the nickname for a process that turns wastewater into drinking water, and the technology is catching on in places like El Paso, Texas, where freshwater is a scarce commodity.

Other cities, like San Diego and Tampa, are turning to desalination plants, which turn seawater into fresh water. But making wastewater and saltwater fit to drink is trickier than you might think. The devil — in this case, potentially harmful contaminants — is in the details, says Susan Richardson, a USC chemistry professor.

“Our research is aimed at knowing what’s formed when you use different kinds of disinfectants to treat water for drinking,” she says. “You never remove 100 percent of what’s there, no matter what you do. But once you know what’s being formed and what the different disinfectants produce, you can tweak the treatment.”

Before joining USC’s chemistry faculty four years ago, Richardson was a research chemist at the U.S. Environmental Protection Agency. Her research at Carolina focuses on regulated and unregulated compounds found in potable water, including harmful byproducts of disinfectants used to make water safe for consumption.

In 1974, chloroform was discovered as the first such toxic byproduct of the water disinfectant chlorine. That compound and 10 others are now regulated in water treatment plants across the country, but scientists have identified about 700 other disinfection byproducts, some more toxic than the 11 currently regulated, Richardson says.

“Our research has shown that granulated activated carbon can reduce organic matter by 50 percent, and if you pretreat the water with chlorine, it can reduce the organic matter levels even further,” she says. “But GAC itself causes other byproducts. Nothing is ever perfect, but we think this is the best way to go for now.”

Her lab is also testing water from saltwater desalination plants in San Diego, Tampa, Fla., El Paso, and the United Arab Emirates. The team is looking for residual contaminants and the best ways to remove them.

“We discovered a few years ago that bromide and iodide shows up a lot in seawater but it can also be in river water, particularly when it’s close to the coast,” she says. “So you can have sodium bromide and sodium iodide that form these very toxic brominated and iodinated byproducts in drinking water treatment. We’ve had a major focus on these to learn how they’re formed, with the goal of getting rid of them.”

The world’s largest wastewater-to-potable reuse water facility in the world is in Orange County, California, where water treatment officials use reverse osmosis and a combination of ultraviolet light and hydrogen peroxide to oxidize waste contaminants in the water.

In a related wastewater reuse project, Richardson’s team is studying 21 compounds that the State of California has identified for monitoring  in the potable reuse of wastewater. Each of the compounds poses a threat to human and ecological health if their levels are too high, and for two of the compounds, it doesn’t take much.

EE2, a synthetic hormone found in birth control pills and excreted by humans, can have serious environmental effects, Richardson says. Experiments have shown that levels of EE2 as low as five nanograms per liter can cause fish population collapse due to feminization of male fish.

Nitrosodimethylamine is another compound on the wastewater-to-potable water list that’s toxic at very low levels — as little as 0.7 nanograms per liter is the health reference for causing human cancer.

Richardson’s team is working with engineers to develop better oxidation methods to treat water for these and other compounds found in water. Solving these sorts of water contamination problems will continue to be challenging as freshwater consumption levels rise with increasing populations and authorities are forced to turn to saltwater and wastewater conversion to meet demand.