Honors graduates live across the globe 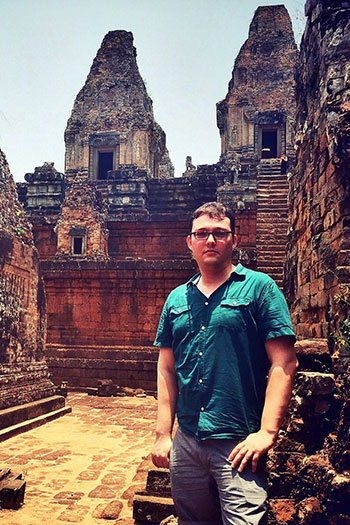 Ron Edwards visiting Cambodia, near his home in Bangkok.

For the past 15 years, Ron Edwards, ’02 anthropology, has lived in Bangkok. That’s more than 80 percent of his adult life, he points out. So when he says “It’s a small world,” he’s confident about his reasoning.

“You’re never more than a day or so from almost anywhere,” he observes. “I’ve come across USC alumni in cities from Bangkok to Paris.”

And indeed, the South Carolina Honors College has many Gamecocks living abroad. They’re working in finance in Beijing, Panama and Toronto and teaching school and coaching cricket in Dusseldorf. In Ansbach, Germany, Kyle Applegate is an Army helicopter pilot, his 2014 classmate and wife, Emily Padget, by his side. An hour and a half northeast of them in Grafenwoehr are Ryan and Bethany Griffith, both 2010 graduates. Ryan is an Army dentist.

There are others in Scotland and Singapore, New Zealand and the United Arab Emirates. Only the continents of Antarctica and Africa appear to be bereft of SCHC alumni (but if we’re wrong about that, please let us know).

Edwards, an Irmo, S.C., native, visited Thailand on his way home from India, where he spent his junior year. Besides exploring Buddhist ruins there, he took in “the technicolor streets of Hong Kong” and a village in Nepal where his anthropology professor Laura Ahearn did her fieldwork. He returned to Thailand after graduation, planning to stay only a year or two. Fifteen years on, he’s head of content for Minor Hotels, a Bangkok-headquartered company that owns or manages 150-plus hotels across the world. His partner and many of his friends are Thai, and that’s the language he slips in and out of throughout the day.

“Despite all of that, some of my absolute best friends in the world are those I bonded with at the Honors College,” he reflects.

How is he different having lived so far from home for so long? “That’s hard to say, but getting to know people from all corners of the world and all walks of life helps build bonds of empathy and an understanding of our shared humanity,” he says. “Looking back across the ocean, it seems like there’s a lot of pain and discord now that could be helped if everyone understood that all of us on this big blue ball, no matter who we are, are in this together.”