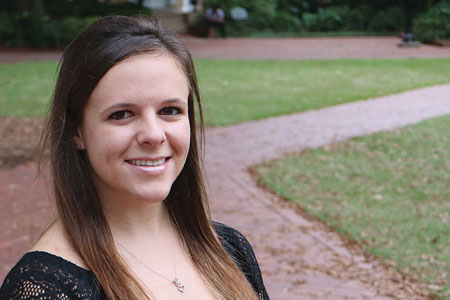 Samantha Petrelli is the inaugural recipient of the Chi Omega Centennial Scholarship, endowed by the Carolina chapter in 2016.

Petrelli, from Harrison City, Pa., threw herself into campus life, getting involved with Relay for Life, the American Marketing Association and the CHAARG (Changing Health, Attitudes and Actions to Recreate Girls) organization. She also worked with Carolina’s Leadership and Service Center, University Housing and the Homecoming Commission — all while amassing 63 academic credits and a 4.0 GPA in her double major of marketing and accounting.

Such a resume made Petrelli more than deserving of the inaugural Chi Omega Centennial Scholarship, endowed with a $25,000 donation by the Eta Gamma Chapter in 2016.

“It’s about being a good citizen and helping others,” says Anne Gregg, a 1979 Honors College grad and Chi Omega alumna and adviser. “The scholarship recognizes somebody who shows they will support USC and our neighboring community.”

Gregg, who also earned a master’s from the Darla Moore School of Business in 1981, started the scholarship along with current Chi Omega Eta Gamma Chapter president Natalie White and past president Annie Wacker. Their idea was to find a way for Chi Omega’s traditionally strong fundraising abilities to directly benefit Carolina.

The chapter’s goal is to grow the fund to $100,000 by 2028, which will mark the sorority’s 100th year at Carolina. Recipients must be Honors College students but don't have to be Chi Omega members.

“I came to Carolina as a timid girl from Pennsylvania,” Petrelli says in the personal statement portion of her scholarship application. “I was 10 hours from home and did not know a single person at this school. Neither of my parents went to college, and I am the oldest child. I had no idea what to expect or where to start, but I was determined to make an impact on the university and as many people in the community as possible.”

Petrelli’s career goal is to become the chief marketing officer for sportswear manufacturer Under Armour, and she also wants to start a yearbook at Carolina. She's also enjoying her new role as a resident mentor.

“I have dedicated myself to the University of South Carolina and my surrounding community this past year, and I intend to do the same thing for my next three years and, really, the rest of my life,” she says. “Carolina has given me so many opportunities, and I want to take advantage of as many of them as possible.”