Justice Stephen Breyer tells graduates they must participate to make the U.S. work 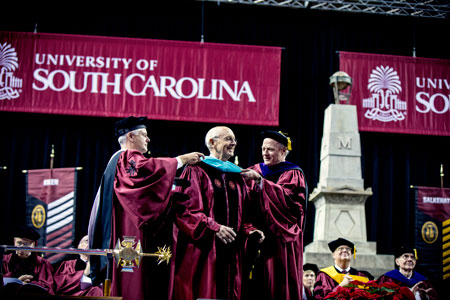 Find someone to love, find a job you like — and get involved in civic life, U.S. Supreme Court Associate Justice Stephen Breyer told December 2017 graduates during commencement exercises Dec. 18.

It was the latter point that formed the basis of Breyer’s talk. The rule of law works only when a country’s people — not just its lawyers, judges and politicians — take action, Breyer said.

“If you don’t participate, this document doesn’t work,” Breyer said, referring to the U.S. Constitution. “And it is this document over many years … that’s enabled 320 million people of every view, every race, every religion, every point of view under the sun — how diverse we really are — it’s allowed them to live together in peace.”

Breyer was appointed to the U.S. Supreme Court in 1994 by President Bill Clinton. He is a graduate of Stanford University, the University of Oxford’s Magdalen College and Harvard Law School. Breyer taught at Harvard from 1967 to 1994. He also served on the Watergate Special Prosecution Force and counsel to the Senate Judiciary Committee. He was first named a judge in 1980, joining the First Circuit Court of Appeals. His book “Making Our Democracy Work” was published in 2010.

Breyer used a conversation he had with the chief justice of the supreme court of Ghana as the starting point for his talk. He said she asked him, “Why do people do what you say?”

Breyer then cited some key U.S. Supreme Court decisions in which people did not do what the judges ordered.

In a case from the 1840s, the court ruled that the Cherokee Indians were the rightful owners of gold found on their land, not the state of Georgia. Following that case, President Andrew Jackson ignored the court’s ruling and sent troops to force the Indians from their land.

The second case was Brown v. Board of Education.

“You’re right,” he continued. “Nothing.”

He briefly reviewed the struggles that followed over the next 20 years before schools nationwide actually ended segregation.

“It ended after a lot of people who weren’t lawyers, who weren’t judges, took action,” he said.

University of South Carolina President Harris Pastides also spoke to graduates, telling them to use their creativity when they enter the workforce.

“I picked three of the most historic creative individuals that I could come up with, Leonardo da Vinci, Albert Einstein and Steve Jobs, and looked for something they had in in common,” Pastides said. “I think you would agree that they were all extremely creative, and I found that all three shared something fundamental. They always worked with both their artistic and their scientific sides. They relied on both aesthetics and science as a matter of course. They did not deny either side.”

More than 1,500 students from all eight university campuses participated in Monday’s commencement.