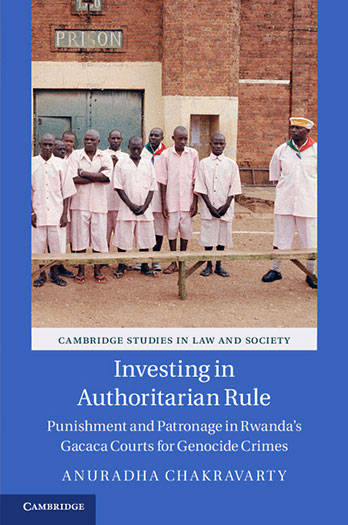 For roughly 100 days in 1994, as many as 800,000 Tutsi people were murdered by soldiers and members of the Hutu ethnic majority in the central African nation of Rwanda. The murders were carried out at the behest of extreme Hutu nationalists and were committed by more than a million ordinary citizens throughout the country.

The killing ended when the Tutsi-led Rwandese Patriotic Front took control of the country. But that led to the displacement of millions of Hutus, who became refugees.

Ten years later, a second crisis developed when tribunals set about putting on trial the million-plus people accused of participating in the genocide. Those trials, called “gacaca,” put communities in charge of hearing evidence and doling out justice to their neighbors.

“It was the most adjudicated conflict in recent history,” says Anu Chakravarty, assistant professor of political science at Carolina. “There was no wherewithal to try a million perpetrators through the regular court system. So they created 10,000 courts with community-elected panels of judges, who had a grade six or seven education.”

The trials themselves took nearly 10 years. There was little hard evidence and a single accusation could get someone convicted. Judges were often from the same ethnic group as those on trial.

“Informants were telling on family members,” Chakravarty says. “The question I looked at was why were people participating in their own punishment?”

Chakravarty’s book, “Investing in Authoritarian Rule, Punishment and Patronage in Rwanda’s Gacaca Courts for Genocide Crimes” (2017) is an in-depth investigation of the courts’ legal operations and shows how incentives, like grants of clemency and opportunities for private gain or career advancement, drew people into the new regime that was dominated by the country’s minority population.

While projecting an image of justice, the courts revealed a sort of patronage-driven relationship, tying the interests of regular citizens to the ruling class, which could withdraw these benefits at any time.

“Rwanda presented this case of a political problem that was perpetrated at an intimate level,” Chakravarty says. “The challenge was to tie the empirical analysis to what were the implications for political life as a whole.”

The book took 10 years to research and write, including 18 months of fieldwork in Rwanda, living with families and interviewing people with local interpreters to gather data and personal stories.

“The challenge of the fieldwork was that people’s lives were on the line,” she says. “These were highly secretive, emotionally charged issues.”

She was there while the trials were still ongoing.

“This kind of work changes you, shakes you, traumatizes you, hearing these stories day in and day out,” she says. “But I matured as a political scientist doing this fieldwork.”

A native of India, Chakravarty earned her bachelor’s in political science from Presidency College, India, and her master’s from Jawaharlal Nehru University. She got a master’s and Ph.D. in government from Cornell University. It was there that she became interested in the Rwandan genocide.