As many as one in four women have been or will become victims of domestic partner violence in the U.S., the Centers for Disease Control reports, and South Carolina traditionally ranks in the top 3 among states with the highest domestic violence homicide rates.

For marriage and family therapists and mental health counselors, evidence of battering or abusive control in a relationship is a red flag that traditional counseling techniques are likely too dangerous to employ, says Ryan Carlson, an assistant professor of counselor education in the College of Education. 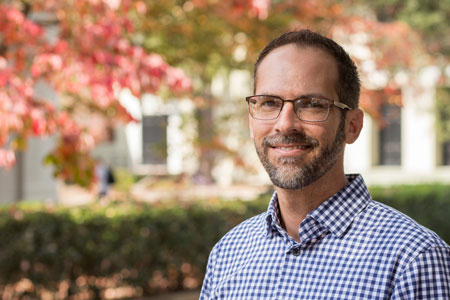 Ryan Carlson, an assistant professor of counselor education in USC's College of Education, says not all intimate partner violence is equal. Some forms of it can be safely addressed in traditional counseling.

“Violence, whether it’s physical or verbal, is a complicated thing,” Carlson says. “The majority of my research focus has been on helping counselors better understand who they’re sitting across the table from — to understand the different types of intimate partner violence.

“The danger is that we might place a victim in a situation to share something that he or she might be punished for later. When one person is exerting control over the other, there’s no even playing field.”

But some forms of intimate partner violence can be more safely addressed in traditional counseling, Carlson says, especially those that don’t fit the classic pattern of one partner exerting power and control over the other. In fact, most violence that occurs in relationships is not about either of those things, he says: “There are far more instances where couples engage in violent-related behaviors simply because they don’t know how to resolve conflict in a healthy way. There’s pushing, shoving, name calling and yelling — it heightens and then calms down. There are distinctive differences between that and situations where one person fears for her life.”

From the outside looking in, those different typologies of partner violence might seem too subtle to matter, but for professional counselors the differences are powerful. Couples experiencing conflict but without the more insidious elements of abusive power and control can often benefit from traditional counseling.

“I think we can do a better job training future counselors, to give them effective tools so that they can see if the violence is situational or if it is more about control,” says Carlson, who teaches graduate students studying to become school counselors, marriage and family therapists and mental health counselors.

Working with researchers at the University of Central Florida on a five-year grant funded by the federal Office of Family Assistance, Carlson has helped develop an assessment of different types of intimate partner violence. The assessment includes an intervention aimed at reducing relational conflict.

“People routinely use the term domestic violence, but from a scholarly perspective we think of domestic violence as a subset of intimate partner violence,” Carlson says. “Domestic violence is about power and control, and it’s much more difficult and even dangerous to address in a traditional counseling protocol.”

While the data is still incomplete, he says patterns are emerging. “Typically, we don’t see people who have argued for years where it suddenly escalates and one of them starts choking the other,” he says. “Whether it’s safe to talk about an incident after the fact is a key indicator — if someone isn’t punished for bringing up a past incident and the person who was in the wrong admits to being in the wrong.

“But if the perpetrator says, ‘Well, you forced my hand' instead of taking responsibility, that would be troubling.”

Carlson remembers a couple in a group therapy session years ago who recounted how their 3-year-old daughter surprised them one day by repeating what she had heard them say to each other.