Ambassador of the arts 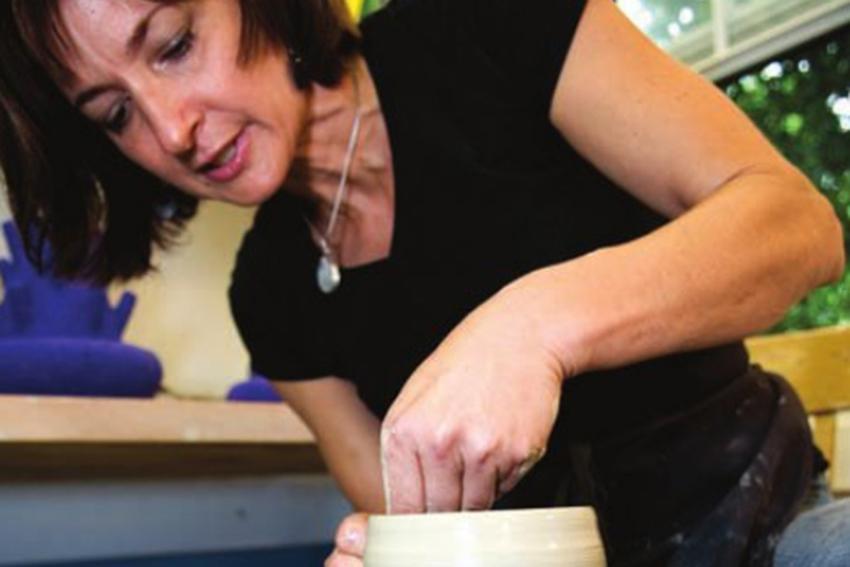 Inside the artist's studio

Virginia Scotchie is working on a display that will be part of the U.S. embassy in Kosovo.

From exploring a centuries-old castle converted into a museum to snapping photos of an interactive urban sculpture, Virginia Scotchie absorbed the history and culture of Kosovo to find inspiration for an upcoming project.

Head of the ceramics department in the College of Arts and Sciences’ School of Visual Art and Design, Scotchie was recently selected to create a permanent installation at the new U.S. embassy in Pristina, Kosovo’s capital. She spent eight days in the country, touring the embassy, meeting artists and learning how the once war-torn region is embracing contemporary and traditional art.

“As an artist, it was really wonderful for me to see how these historical sites have been renovated, excavated, restored, and art is there now,” says Scotchie, whose work and trip to Kosovo is part of the prestigious Art in Embassies program through the U.S. State Department. “They just have a true love for their history, art and artists.”

The new embassy, which is still under construction, is a contemporary structure with beautiful glass and stone features. Scotchie visited the site with Arts in Embassies curator Camille Benton and artist Margo Sawyer of the University of Texas. Scotchie will return this summer to assemble her installation.

“It was really enlightening for me to see it at this stage of the process and going to it in a raw state,” says Scotchie, who is currently working on pieces for the display.

She plans a grid arrangement of large ceramic pieces along an expansive wall. The objects are influenced by the architecture and historical elements of daily life in Kosovo. Some will reflect aesthetics from Kosovo’s numerous mosques and cathedrals, and others draw inspiration from a traditional filigree jewelry maker Scotchie met in the countryside.

I tell my students, ‘Don’t just look at artists from this country.’ It’s wonderful to meet artists from all over the world and get to know their work because it’s so interesting and different.

Scotchie, who has exhibited her work throughout the United States and abroad, partnered with the Arts in Embassies programs in the early 2000s when South Carolinian Robert V. Royall was U.S. ambassador to Tanzania. Some of  her work was on loan to the embassy residence in Dar Es Salaam, and Scotchie met Benton during that time.

"Ceramics have historically occupied an important place within both U.S. and Kosovar cultures,” Benton says. “Virginia Scotchie’s clay forms maintain and update this ancient tradition. Their vibrant colors and whimsical shapes give them a dynamic and contemporary feel, yet they reflect familiar references that can be understood across cultures.”

The Arts in Embassies program started during President John F. Kennedy’s administration and is a public-private partnership that spans 200 venues in 189 countries. Since 2000, more than 58 permanent collections have been installed in the State Department’s diplomatic facilities worldwide.

For Scotchie, who has worked at the university since 1992, it’s important for her students to study and research artists from across the globe. She was recently inducted into the International Academy of Ceramics, one of only seven artists from the United States in the 2017 class. She views this honor as a way to open doors for not only her work but also for her students and the school.

“To me, what’s so exciting is the international connections,” Scotchie says. “I tell my students, ‘Don’t just look at artists from this country.’ It’s wonderful to meet artists from all over the world and get to know their work because it’s so interesting and different.”