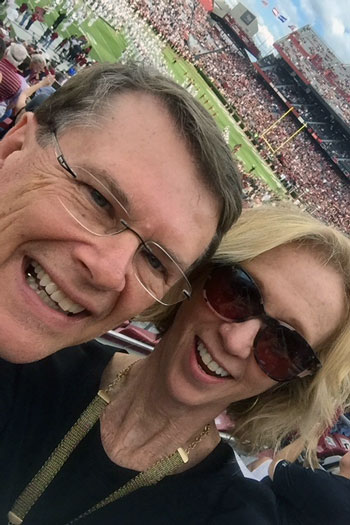 Michael Westbrook and his wife love watching the Gamecocks play.

That’s why Westbrook chose the athletics department when he was looking to make a gift to the school that gave him so much.

“For a lot of kids, if it weren’t for athletics, they wouldn’t be able to go to college,” the 1979 business school graduate says.

Westbrook started his career as a salesman with GlaxoSmithKline, living all over the U.S. But, when he found himself back in his native North Carolina with three children, he decided to change careers instead of uprooting his family again. He now is a financial adviser with Piedmont Advantage Credit Union in Winston-Salem, N.C.

As a financial adviser, he counsels his own clients about how to make the biggest impact with their philanthropic donations.

“I ask them where they want to have an impact,” he says. “I ask what their passion is, their favorite charity, something that was so meaningful that they want to share it with someone else.”

For Westbrook, that was USC.

“I feel blessed that I found Carolina,” he says. “There’s no way I’d have the career I’ve had without my Carolina education.”

Westbrook’s gift is in the form of a whole life policy that will go to The Athletics Excellence Fund.

“As you become more financially stable, you find there are things you don’t need,” he says of the life insurance policy that he already been paying premiums when he decided to make a gift of it to the university.

As a financial adviser, Westbrook says, he extols the virtue of such gifts, which give a guaranteed payout to the university and offer him a tax-deductible annual gift in the form of the premiums he pays on the policy. He also is a licensed life, health and long-term care insurance agent.

Westbrook has stayed involved with the university since graduation. He is a Life Member of the My Carolina Alumni Association and he served as president of the Piedmont Triad Gamecock Club for five years.

“Carolina means so much to me,” he says. “I even have a brick on the Horseshoe.”

He says that love has been passed down to his daughters even though they did not go to USC. His oldest daughter who works at Columbia’s Heathwood Hall is an adviser at Carolina for the sorority she was a member of at High Point University.