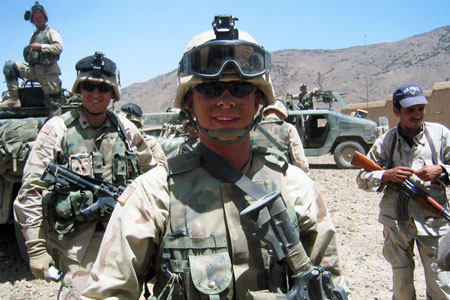 Christopher Wach served eight years in the military, but he had to create a new career path when wounds he sustained in Afghanistan led to a medical discharge.

As a teenager, Christopher Wach thought he had life figured out. He decided to drop out of high school, get his GED and make a career in the military.

He served eight years. Then he sustained gunshot wounds while serving in Afghanistan, earning him two Purple Hearts and a medical discharge.

“My injuries disqualified me from doing my job. So, they ended up sending me home, and I had to figure out what to do next,” says Wach.

While undergoing physical therapy and rehab at Fort Jackson, Wach, who’s originally from Columbia, decided to go to EMT school. He worked as an EMT for five years before reaching another crossroad.

“I really enjoyed emergency medicine. I met a lot of great friends, and learned a ton, but it’s a really physically demanding job. After five years, it started taking a toll on me. I knew I wouldn’t be able to do this forever; I needed to go back to school,” says Wach.

Wach completed an associate’s degree at Midlands Tech, then applied to the University of South Carolina. He was accepted into the biological sciences program in the College of Arts and Sciences.

“I was nervous to come here because I wasn’t very familiar with academia at all. I was a grunt — we aren’t really the academic type,” says Wach. “So, showing up here and walking into a class with 340 kids in there was pretty intimidating. But after a while I got used to it and I got really comfortable here. It was kind of like a second home to me.”

Wach excelled at Carolina, and as graduation neared he began considering his next steps.

When I go out and do all my clinicals, I am here in the community that I’m going to work in and that I’ve lived in my whole life.

“Initially, I was thinking I wanted to further my career in medicine, so I was really thinking about medical school. But I’m 41, and I didn’t really want to start a 10-year track,” says Wach. “I’d considered a physician assistant program, but at the time there wasn’t one in Columbia, and my wife and I couldn’t really up and move.”

The School of Medicine was in the midst of developing a physician assistant program at the same time that Wach was completing his undergraduate degree.

“When I found out about the PA program here, I said, ‘That’s what I’m doing.’ I was so excited that I was jumping up and down. I didn’t even apply to any other schools. I was going to go here, and that was it. I had just determined that was what I wanted to do,” says Wach.

“It was really important to me that the program was here. When I go out and do all my clinicals, I am here in the community that I’m going to work in and that I’ve lived in my whole life,” says Wach. “Beyond the location, when I started getting more familiar with the program, and learning everything we have at our disposal — the support, the equipment, the experienced faculty, the Ultrasound Institute — I truly felt like we have the No. 1 program in the nation right now.”

Wach and his 28 classmates will graduate in May 2020, and their job outlook is bright with the field expected to grow by 30 percent in the next six years. Wach says he has already had several providers ask him to come work with them, and he hasn’t even completed his first semester.

“I should have gone to school when I was a young man, but here I am and I don’t think I could be at a better place,” says Wach.